You are Here: Home › All Hotels › Serengeti Tanzania Hotels

The Serengeti National Park has a huge range of accommodation, ranging from large hotels to small luxury lodges and no frills safari camps. The Serengeti is most famous however for its mobile camps - light weight safari camps that effectively move with the Migration herds. There are a number of these mobile camps operating in the Serengeti

List of Best Campsite and B&B in Serengeti Tanzania

Serengeti National Park is believed to hold the largest population of lions in Africa due in part to the abundance of prey species. Currently there are more than 3000 lion living in this ecosystem. 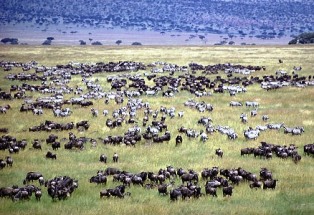 it is home to great numbers of wildlife, many of which endure the Wildebeest Migration which offers some of Africa's most spectacular game-viewing and phenomenal photographic opportunities.

The park's terrain is varied: the vast, treeless central Serengeti plains, Savannah dotted with acacia trees, monumental rocky Kopjes, reverie bush, thick scrub to streams, rivers, small swamps, and lakes. The Serengeti is the setting for so many wildlife documentaries with good reason.

The annual wildebeest migration is one of the most spectacular and breath-taking events in the world. From the Serengeti to Kenya's Masai Mara over 1.4 million wildebeest and 200,000 zebra and gazelle, relentlessly tracked by Africa's great predators, migrate in a clockwise fashion over 1,800 miles each year in search of rain ripened grass.

This mass of moving animals is so large that even when it is in Kenya's Masai Mara, parts of it are still in the Serengeti. Note that even during August to November, the approximate time when most of the Wildebeest Migration are expected to be in the Masai Mara, the wildlife is still plentiful in the Serengeti, as the 'resident' animals opt to stay where they are instead of follow the Wildebeest Migration.

Virtually all safari animals. All of the 'Big Five' are present in Serengeti. Elephants are few in number on the wide grassy plains but more concentrated in the wooded areas of Lobo and the Western Corridor.

An estimated 300 lions hunt on the central Seronera Plains alone, with more being dispersed around the park. Leopard, more elusive and very well camouflaged in the foilage of trees can often be spotted by their tails hanging down. Buffalo are significant in number and sizable herds are scattered throughout the park, whilst the few remaining black rhino are protected in an innaccessible area.

To search for the elusive Wildebeest Migration, visit the Serengeti safari from December to July. To see Predators, June to October are the best months. For the best chance of finding Migration, allow a minimum of 3 days, longer if possible.

The Annual Movement of Wildebeest and other grazing herbivores across the Serengeti - Mara ecosystem is one of the greatest spectacles in the natural world. More on Wildebeest Migration.

What are the Big Five in Serengeti National Park

You may hear of the Big Five before going on Safari, from an old book, or from a nature documentary. Today, they are five of the animals which people most want to see while on Safari. One hundred years ago, amid pith helmets, mosquito boots, and 'darkest Africa', the Big Five were the most sought after animals to hunt.

They were the fiercest, the most dangerous animals; the animals that would hunt the hunter. Explorers of East Africa went home with stories of lions and leopards in the tall African grass, of rhinos that would charge at the mere smell of a person, of the Cape Buffalo hidden in the bushes, and of the terrors of an enraged elephant.

Today, of course, the hunting is done with camera lenses, but that doesn't take away from the thrill of seeing your first lion or hearing a leopard walk past your camp at night. These big mammals are each far more interesting than the early explorers knew.