Its at Ruaha National Park where nature becomes a reality. Welcome to Ruaha game park in Southern Tanzania. Come and enjoy a vacation in Ruahas Hotels and safari lodges in Tanzania. Ruaha Park derives its name from the great Ruaha River. The Ruaha Game Park is the second largest National Park in Tanzania, that covers 12950 square km and is home to 10,000 elephants (the largest population of any East African national park), which protects a vast area of dry savanna.

It depends on the Great Ruaha River, which marks the Eastern boundary of the park.

The Ruaha and Rungwa area is the home to over 450 bird species. One of its principal attractions lies in being able to see greater and lesser kudu as well as the majestic sable and roan antelope.

As well as an abundance of lion, leopard and cheetah it is also home to the increasingly rare wild dog.

It lies 130 km west of Iringa. Accessible by 3 hours flight/ 10 hours drive from Dar-es-Salaam. Works nicely with a visit to Safari to Selous Game Reserve.

Things to Do in Ruaha National Game Park:

Given the distance, spend at least 3 nights. Best during the dry season (July to October).

All the usual: Elephants, Buffalo, Lion, Leopard and Cheetah. Hippos, crocodiles, turtles inhabit the Ruaha River. Some of the unusual: Sable and Roan Antelope and Wild Dogs. Grant's Gazelle and the tiny dik-dik thrive in the grasslands bordering the river.

Birdlife is prolific, over 370 species have been recorded, some of which are not found in Northern Tanzania. Eurasian migrants flock to Ruaha twice a year - March to April and October to November - joining the resident kingfishers, hornbills, African fish eagles, sunbirds, egrets and plovers. Unusual: sulphur-breasted bush-shrike and yellow collared love birds. 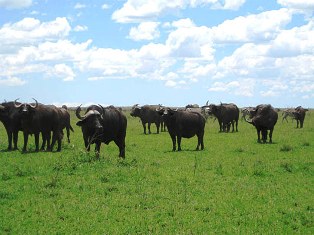