The Annual Movement of Wildebeest Migration and other grazing herbivores across the Serengeti - Mara ecosystem is one of the greatest spectacles in the natural world.

Over 2 million animalspartake in this great migration, with some 200,000 Zebra ahead of, and 500,000 Thomson's Gazelles behind, the players - one and a half million wildebeest,moving in a gigantic herd, migrate from the south-east part of the park to the greener west and north andreturn again to the south in a clockwise circle.

Members of the vast wildebeest herd give birth between January and March on the short grass plains of the southern Serengeti (in Ndutu/Gol/Southern Loliondo).

By occupying and birthing on these open plains, the mass of herbivores reduces their competitive pressure on other grazers in the Serengeti ecosystem for upto half of the year.

The short grass plains are green only during the rains and the mostly treeless landscape provides optimum conditions for the females to give birth as potential predators are more easily detected here than in the woodlands.

In June, they then return to the north-west towards Western Corridor of the Serengeti and its Grumeti River, significant numbers may also go up through Loliondo, or via Seronera and Lobo. This watercourse is their first real obstacle and gigantic crocodiles are waiting for the hesitant wildebeest to stumble at the crossing.

In early July- mid August, from Grumeti, if conditions are very good, i.e. there is plenty of grass and water; the herds will be spread out all the way from Seronera to the Mara River.

Here again, they must cross another river, Mara River. This phenomenon is sometimes called the Circular (Wildebeest) Migration.

Over 250,000 wildebeest alone will die along the journey from Tanzania to Masai Mara Reserve in upper Kenya, a total of 500 miles. Death is often caused by injury, exhaustion, or predation.

The Wildebeest Migration as a whole need not all pass into Kenya and many stay behind or cross and re-cross the border areas. This carries on through till October/November, when they will start thinking of heading back. Again this will be dependent on the rains.

You can never predict with certainty where they will be; the best you can do is to suggest likely timings, based on past experience - but you can never guarantee the Migration a hundred percent. 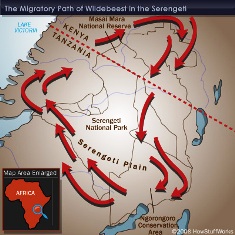