Mkomazi National Park Tanzania , It covers an area of about 3230 square km of which 2010 square km is from the Game Reserve and rest from the forest reserve. The name Mkomazi comes from the Pare language and means "The Source of Water", referring to the Umba River, which arises in the Usambaras and provides permanent source of water to the area.

Mkomazi Game Reserve is excellent for birds. It is a scenic landscape of Savannah vegetation and a backdrop of Mount Kilimanjaro. Endangered species, particularly the black rhino and the wilddog, are protected in Mkomazi through a project initiated by Tusk Trust in the 1990s.

The area is also famous for large migratory herds of Elephants, Oryx and Zebra that wander through the park.

By special arrangement it is possible to walk all the way from the West Usambara Mountains, through the Pare Mountains and down into Mkomazi Game Reserve, an incredible hike of about 5 days.

Mkomazi lies roughly between the northern slopes off the Pare and Usambara Mountains and the northern frontier, next to Tsavo West National Park.

Mkomazi is easily accessible by road and air. It is about 6 km from Same town on the Arusha - Dar-es-salaam Highway, 112 km from Moshi and 142 km from Kilimanjaro International Airport.

Things to Do in Mkomazi National Park:

Late June – early September is best for large mammal and bird watching. Scenic beauty is at its peak March – June.

It is the habitat of a large population of big and small mammals including the carnivores, lesser kudus, Giraffes, Grant's Gazelle, Hartebeest, Buffalos, Elephants and Zebras.

It is the only protected area in Tanzania with a large and visible population of Gerenuks, an Antelope with a habit of getting up on its hind legs to browse trees.

The main predators' animals such as Lion, Hyena, Leopard and Cheetah bound significantly.

There are about 400 species of birds, including the tawny eagle, Ostrich, Parrots, pelicans, Ducks and Kingfishers.

The reptiles include Crocodiles in the Umba River, Pythons and Agama 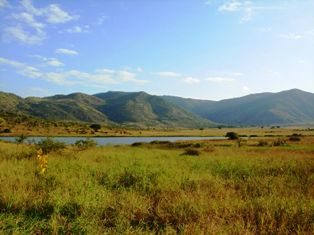