The Park is Tanzania's 13th National Park. Tourists can view animals basking along the Indian Ocean shores. It has an area of 1100 square km and was established in 2005 from an a game reserve which had existed from 1969.

Generally accessible all-year round, but the access roads are sometimes impassable during April and May. The best game-viewing is in January and February and from June to August.

Herds of up to 30 elephants are encountered with increasing frequency, and several lion prides are resident, together with leopard, spotted hyena and black-backed jackal.

Boat trips on the mangrove-lined Wami River come with a high chance of sighting hippos, crocodiles and a selection of marine and riverine birds, including the mangrove kingfisher and lesser flamingo, while the beaches form one of the last major green turtle breeding sites on mainland Tanzania 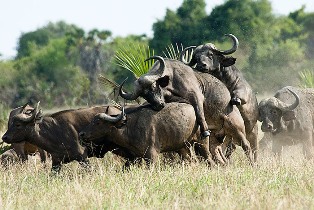