If you have ever visited Selous Game Reserve in Southern Tanzania, You will agree with me that this is the best national park in Africa second to Serengeti in Northern Tanzania. The GameReserve has an area of more than 50,000 sq km making it the World's Largest Conserved Area excluding polar regions. Selous is three times bigger than the Serengeti National Park. The reserve is a World Heritage Site and covers almost 6% of Tanzania's land.

The Selous takes its name from the famous hunter and conservationist Frederick Courteney Selous who was killed in action in World War I within the now Selous.

His grave lies close to the Beho Beho Hills and can be seen on a gamedrive in that area.

The Selous GameReserve is home to a high diversity of both large mammal and bird species. The SelousGame Reserve has over 60,000 elephants and 40,000 hippos.

The world's largest population of African Hunting Dogs exists in the reserve. Of Tanzania's 1,113 different species of bird, 430 have been positively identified within the Selous GameReserve.

The photographictourism section of the Selous is very atmospheric, displayingthe grandeur of this incredible African wilderness.

The Rufiji River meanders its way through the Miombo woodland and Acacia-Terminalia savanna, connected by streams to five attractive lakes, which teem with hippo, crocodile and waterfowl.

This untouched uninhabited area is home to the biggest herds of elephant and other wildlife to be found anywhere in the world.

The large meandering Rufiji River with its network of channels, connecting lakes and lagoons offers visitors the unique opportunity to go on safari by boat and experience the spectacular concentration of wildlife from an unusual perspective, especially during the dry season when animals congregate.

Game drives and walking excursions are also very rewarding. There are elephant, hippos and rhino (although few now remain). This reserve contains about one third of all the wild dogs (often called painted dogs), in the world.

Southern Tanzania, between Ruaha and Dar es Salaam, usually reached by flight from Arusha or Dar es Salaam. Works nicely with a visit to RuahaNational Park. It is approximately 250 km drive from Dar-es-salaam. It is also possible to arrive by train from Dar es Salaam.

Things to Do in Selous National Game Reserve:

Given the distance, spend at least 3 nights. Best during the dry season (June to October). 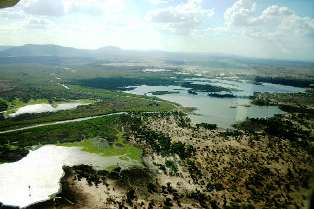