What is so special Rubondo National Park in Tanzania? This site has more details about this page and we are happy to welcome you to this guide. This Park has an area of 240 square km and is surrounded by about a dozen smaller islets that belong to the park. Unlike other parks, cars are prohibited on the island hence there are guided tours led by park rangers who are usually armed.

A peaceful paradise with untouched beaches, bird-rich marshes and rareanimal species. Here you can go on foot or by boat.

This is the only good place in Tanzania to find sitatunga, East Africa's only truly amphibious antelope. There are also other antelopes, vervet monkeys, small carnivores, hippos, crocodiles, reptiles and at least 200 bird species.

There are also chimpanzees (unhabituated), elephant, colobus monkeys and giraffe, but you are less likely to see them. It is also possible to go fishing for the Nile Perch.

Island in the Lake Victoria (the World's second largest Lake), north west of Mwanza. Reachable by flight from Arusha or Mwanza. Or by road from Mwanza to Nkome and then a 2 hour boat transfer.

Things to Do in Rubondo National Game Park:

Animals include: Hippos, crocodiles, Vervet monkeys, Marsh mongooses, Genets and Pythons. Several other animals have been transplanted into the Island including: Giraffes, Elephants, Rhinos, black and white Columbus monkeys and Chipanzees.

The birdlife is unique with birds from east, central and southern Africa flocking to "bird island" to breed. Bee eaters, Fish eagle, Saddle-billed stork, Kingfisher will be seen while Tilapia and Nile purch in the lake. 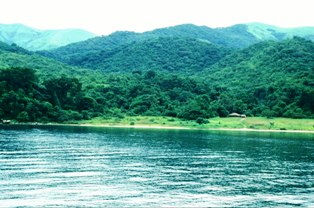