Uganda Safari9 - Safari to Mountains of the Moon

Briefing on your safari in Kampala. Depart for Kasese, via Queen Elizabeth National Park. Set off on the southbound road at 10am.

On the way see the royal drum makers, stand on the Equator, and bargain at the roadside markets. 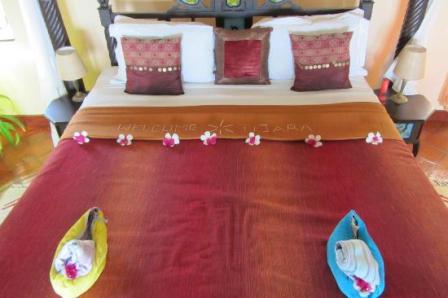 Begin the climb at Rwenzori Mountains - to Nyabitaba Hut (2650m). After breakfast drive to Nyakalengija trailhead (1600m). Make final arrangements for a guide and porters.

Begin hiking up to Nyabitaba hut. Walk through the banana shambas on the side of the steep foothills, past the typical Bakonjo homesteads with the children waving you on!

Follow the trail along the Mubuku River, through landslides and up and down rocks and bluffs.

Cross the Mahoma River and climb steeply through bracken fern slopes and Podocarpus forest to Nyabitaba Hut for overnight (FB). 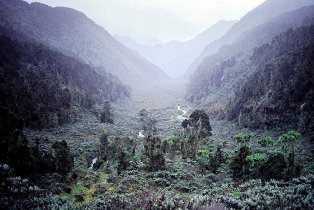 To John Matte Hut (3350m). The trail from Nyabitaba drops down through the forest to the Kurt Shafer Bridge, just below the confluence of the Bujuku and Mubuku Rivers.

A steep ascent through bamboo forest, traversing a long and exhausting stretch of slippery moss-covered rock.

From Nyamileju rock shelter, on clear days, Mount Stanley and Mount Speke can be glimpsed before passing into the zone of the giant heather, lobelia and groundsel.

The final stretch to the hut is across a tiring bog, the first of many for which the mountain is infamous (FB). 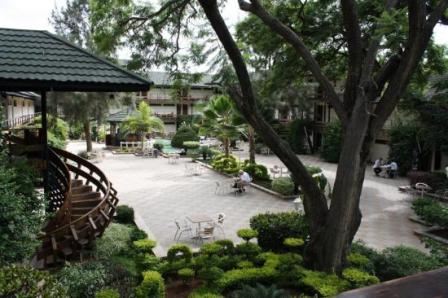 Jumping from tussock to tussock, the bog is finally crossed but rarely without the feet sampling some of the freezing ooze below.

The Upper Bigo bog gives way to Bujuku Lake, with views of Mt Baker to the South and Mt Stanley to the West. Bujuku Hut, well located in the shadow of Mount Baker and Mount Speke, is set in a narrow valley below Stuhlmann Pass. A spectacular setting but it can be very cold, even for the Rwenzoris. (FB).

To Elena Hut (4541m). Leaving Bujuku, through more bog, the trail climbs the steep slopes west of the lake, passing through the magical Groundsel Gully as it ascends to Scott-Elliot Pass at 4372m.

At the head of the gully a metal ladder takes you over a steep section after which the trail splits into two.

The right leads up to Elena Hut and Mount Stanley on a steep trail over large boulders.

The left path leads to Scott-Elliot Pass and down to Kitandara Lakes. For those sleeping at the basic Elena Hut be prepared for a cold and icy night (FB). 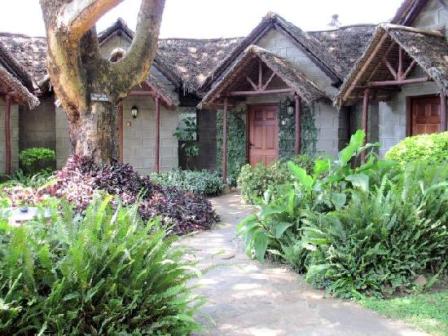 For those climbing Margherita peak (5109m) continue to the base of the Stanley Glacier.

Depending on the weather and the individual’s acclimatization, it can be a four to seven hour walk to the summit of Margherita.

This is a tough walk over three glaciers, slippery rock, ice and very exposed areas which are open on many sides.

It is only for the physically fit and is a technical climb which requires roping up, crampons and appropriate equipment for cold, windy and icy conditions.

It is best to attempt the final climb in a minimum group of 4 - two climbers and two guides; (a supplement for the extra guide has to be paid for at the time of booking).

Climb on to the glacier, cross the Stanley Plateau and proceed with the ascent. Subject to altitude sickness, fog and weather, scramble up to the summit of Margherita, crown of the Rwenzoris.

Due to the altitude and the tough conditions not everybody will make it to the summit so do not be disappointed if you do not.

Returning to Scott-Elliot pass, there are spectacular views back to Bujuku Lake and Mount Speke, up to Mount Stanley and down to the Kitandara Lakes.

Once over the pass the trail enters an alpine zone of sparse vegetation and rough boulders. 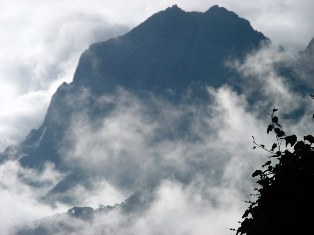 To Guy Yeoman Hut (3260m). From Kitandara, the trail ascends steeply up the headwall, spreading out from the base of Mount Baker and continuing along the south side of the mountain to Freshfield Pass.

On a clear day there are views into the Congo to the west and Mount Stanley to the north.

From the pass, the long muddy descent continues, passing the rock shelter at Bujangolo, the base camp for the historic expedition by the Duke of Abruzzi in 1906 (FB). 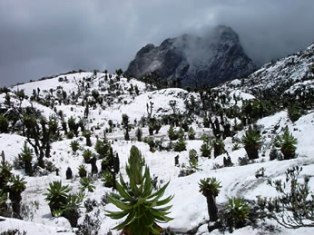 To Nyabitaba (2650m). The path down can be slippery and muddy with little to hold on to and requires careful balancing over the vertical mud or steep rock. An overnight stop at the Nyabitaba Hut is a pleasant rest after the exertion of the previous days (FB).

To Nyakalengija trailhead (1600m). A gentle descent down the muddy paths to the trailhead, arriving late morning. Lunch in Kasese.

Drive to Queen Elizabeth National Park, game viewing on the way. In the afternoon time permitting, a boat cruise on the Kazinga Channel where the wildlife and a vast array of birds come to drink O/N: Mweya/Jacana (FB). 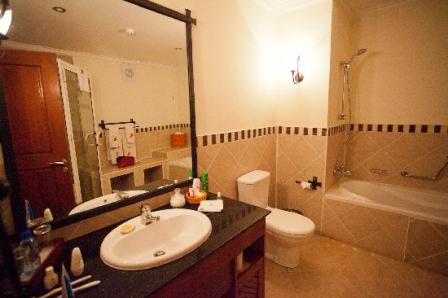 Other Safaris in Uganda and other East African Countries