You are Here: Home › All Hotels › Ngorongoro Conservation Area Hotels

Do you want information about Ngorongoro Conservation Area Hotels and Safari Lodges, Campsites, Wildlife? Here is the page for you.

Welcome to Ngorongoro Conservation in Tanzania the Craddle of Mankind in Africa.

The Ngorongoro Conservation Area is both a fantastic game-viewing destination and a significant archaeological treasure.

Often called an 'African Eden' and the 'Eighth Wonder of the Natural World'.

The terrain embraces several distinct habitats from open grasslands to mountain forest, and from scrub bushland to highland heath.

Around 25,000 animals live in the Ngorongoro Crater thoughout the year, whilst in the NCA, as a whole, the numbers can swell to more than 2.5 million, depending on the season.

The relationship between the Maasai tribe and the Ngorongoro eco-system is impressive.

The Maasai herd their cattle into and out of the crater daily for water, leading their cattle to water alongside the "Big 5".

It is home to one of the world's largest inactive and unflooded volcanic calderas with a rich diversity of Tanzania wildlife safari(including some of Tanzania's last remaining black rhino), and the famous paleontological site of Oldovai Gorge nearby. 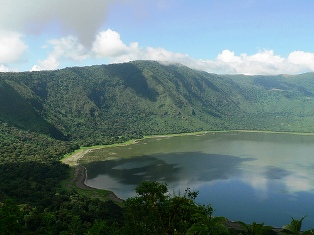 4 hours drive from Arusha on the way to the Serengeti (Serengeti National Park).

1 half-day is usually enough to see the Ngorongoro Crater (Ngorongoro Wildlife Safaris), not more than 2 half- days.

One of the few places you have a chance to spot rhinos. The Ngorongoro Crater support a large resident population of wildlife pre-dominantly grazing animals.

More than 100 species of birds not found in the Serengeti (Serengeti National Park) have been spotted here. 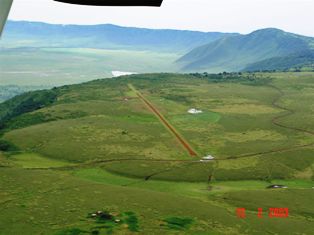 Olduvai Gorge is known as the cradle of mankind. Layer upon layer of volcanic deposits were laid down in orderly sequence over a period of almost two million years, making Olduvai Gorge a remarkable site that documents ancient life.

It is here that Louis and Mary Leakey discovered the first human skull of Zinjanthropus, commonly known as 'Nutcracker Man' after nearly 30 years of excavation.

Now renamed Australopithecus boisei, this creature had a massive skull with huge teeth that suggested a diet of coarse vegetable food, and lived 1.75 million years ago.

Nearby are the Laetoli footprints of walking adult and young aged 3 million years. The remains of pre-historic Elephants, giant-horned Sheep and enormous ostriches have been unearthed here.

Olduvai Gorge is conveniently located between Ngorongoro Wildlife Safaris- Ngorongoro Crater and the Serengeti National Park. Although there is an unimpressive museum with a lot of information, it is usually worth a quick stop even for those who are only slightly interested in history and/or archeology.

Ol Doinyo Lengai is also known as the "Mountain of God" by the Maasai. They believe that the mountain increases fertility and they advise women who have difficulty conceiving to visit.

The trek up to the Ngorongoro Wildlife Safaris (Ngorongoro Crater) is an exceptionally demanding climb of around 1700m (5600 ft).

The trek starts at midnight or shortly after so you can walk during the cool hours and reach the summit by dawn.

This is the only active volcano in the area and the world's only natrocarbonate volcano, having erupted in 1966 and 1983.

The most recent erruption occured around July 2007 - 2008. It's a truly unusual destination for those who really want to get off the beaten path.

It is located just outside the NCA, to the north-east near Lake Natron.