You are Here: Home › Kenya Attractions › Places to visit Zanzibar

The following are some of the Places to visit Zanzibar, Zanzibar Tourist Place.

The stone town is a unique architectural and cultural mix that has formed over a millenia of interaction between people from the East African mainland, Arabia, the Persian Gulf, India, China, Portugal and beyond.

A guided tour may be organised to take you through the narrow twisting gullys into the market where you may catch the fish auction.

In light of its historical significance and value, the United Nations has declared it as one of the World's Cultural Heritage sites.

This has further sparked an architectural restoration effort after many years of neglect.

The architecture of Zanzibar and its historical significance is a vast topic. You may wish to refer to the following texts for further information.

Admired for its high ceilings and towering pillars, this used to be the Sultans Palace until 1911.

Here can be found a collection of portraits of past Sultans and their documents, and relics of early explorers - including Dr. Livingstone's medicine chest and local arts and crafts.

This house was once placed by the Sultan Seyyid Majid for use by the European explorer David Livingstone, while in preparation for his expedition to the mainland in 1866.

Zanzibar was the hub of the slave trade in East Africa, until 1873 when it was abolished. On this site now stands a church.

This small island used to be known as prison island, where slaves used to be kept pending transportation to other markets. Remains of underground slave chambers can still be seen. One of the main attractions today are the giant tortoise.

This palace was built by Sultan Sayyid Bargash for his harem in the 1880's. It was however accidentally burnt down in 1899 and now stands as ruins.

This tour enables one to see, taste and smell various spices and fruit that are cultivated on the Island.

This full day guided excursion begins at 9h00 when you are picked up from your hotel and transferred by minibus to the fishing village of Fumba, 18 kilometres away.

Here you will be provided with a life jacket demonstration followed by a briefing on the days excursion.

You will then board the dhows and set off in search of the dolphins (85% chances).

The species frequently found at Menai bay are spinner and bottlenose dolphins.

You will swim with dolphins if they stay close to the boat, but are unlikely to be able to touch the dolphins as they are of course wild animals.

You will then go on to one of the selected snorkeling locations. Here you will snorkel while accompanied by a snorkeling guide to show points of interest and to assist with beginners.

Snorkeling equipment will be provided. You will then move on to the another island or sand bank for lunch. Lunch is a traditional Zanzibar meal and typically includes a selection of barbecued fish, rice, lentils and fish curry. Chilled fresh fruit juice, mineral water and bottled soft drinks are available throughout the day. You will spent the remainder of the afternoon relaxing, swimming or snorkeling.

Return to Fumba by sail, if wind permits; setting off around 16h00, the journey takes approximately one hour. You will be transferred back to your hotel.

Description of the Dhow Lunch - Prison & Bawe Islands:(Open Bar with assorted drinks available)The Dhow will cruise first to Prison Island to explore the island for one hour - photograhic giant Tortoises which came across from Seychelles more than one hundred years ago and the Prison which was used as a hospital.

This historical Island was formerly owned by an Arab and used for the confinement of refractory slaves.

It was bought by General Mathews and the jail (gaol) which still stands was built in 1893 and hence the name "PRISON ISLAND".

Leave for Bawe Island where a powder soft beach awaits you. The crew will prepare a sensational seafood BBQ for you while you snorkel the reef close to the island. Clown Fish, Parrot Fish, Moorish Idols and the occassional Lion Fish all dance to the music of the waves through their majestic ballroom made coral.

After a lunch of fresh fish, crabs, cigal, prawns, salads and fruits of the season, there is time to relax on the beach and to swim and snorkel some more.

Late afternoon as the sun starts to sink lower in the sky you will depart for seafront of Stone Town where your transportation awaits you.

The Coral rag building are their most picturesque from the sea, as the fading sun throws shadows between the buildings and sets a pastel glow to its walls.

The Jozani Forest Reserve in Zanzibar is home to most of the world's remaining 2,000 Red Colobus Monkeys (National Geographic Vol.194 No.5).

These monkeys once found all over the island, are now concentrated in the forest area. A half day tour consists of a walk into the forest and mangrove swamps where one may have a close encounter with these endangered species. 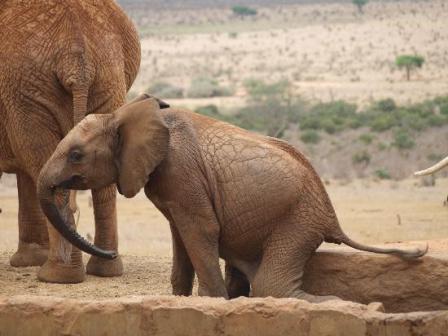