What is so special about Pemba Island Beaches? Nestled between isolated white sandy beaches & the unspoiled rustic beauty of the bush near by Pemba beaches make a vacation in Pemba Tanzania a long lasting memory

The island of Pemba known as 'Al Jazeera Al Khadra' (the green island, in Arabic) is an island forming part of the Zanzibar archipelago, lying off the east coast of Africa in the Indian Ocean, positioned directly east of the of the port of Tanga..

It is situated about 50 kilometres to the north of the island of Zanzibar & 50 kilometres east of mainland Tanzania.It is completely different from Zanzibar ... more undulating, verdant and remote.

Most of the island, which is hillier and more fertile than Zanzibar, is dominated by small scale farming. There is large scale farming of cash crops such as cloves

The most important towns in Pemba are Chake-Chake (the capital), Mkoani, and Wete.

In addition to its rich history and traditions, Pemba is of interest for its wealth of natural resources ranging from beaches to mangrove ecosystems to natural forests.

While much of the coast is lined with mangroves, there are a few amazing stretches of shoreline and enough attractive offshore islands with pure, clean beaches and interesting bird-life to keep you busy for quite a while.

Pemba has some of the world's best diving and fishing and because it is not as travelled as it's more famous neighbour - Unguja (Zanzibar Island) - it is that much more pristine.

Pemba has some of the most spectacular diving in the world. Diving is conducted on the western side and is characterised by crystal clear, blue water drop-offs along with pristine shallow reefs.

The Pemba Channel is widely known, and is considered one of the world's best places for fishing.

The Pemba Channel itself is Africa's premier marlin destination. Striped, black and blue marlin, broadbill, mako, sailfish, tiger and other sharks, dorado, wahoo, yellowfin tuna and many other game fish are all to be found in her azure waters 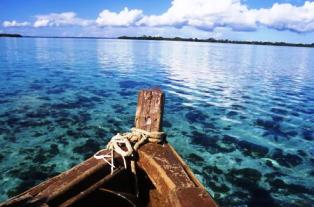