Can I be your guide to Meru National park in Kenya? Do you need details about Meru game reserve?

On this site we are privileged to give you detailed information about Meru and its tourist attractions in Kenya.

Meru is a savanna National Park, 35 km east of Maua town in the north eastern lowlands below the Nyambeni hills.

Meru is part of a complex of protected areas along the Tana river that includes the adjacent Bisanadi and Mwingi National Reserves, Kora National Park and Rahole National Reserve.

The wetter North Western sector is hilly, with rich volcanic soils. The land flattens towards the east, where grey alluvial volcanic soils appear.

The area is crossed by numerous permanent streams, draining from the Nyambenes and flowing in parallel between tongues of lava, south eastwards towards the Tana River.

As well as the many streams that cross it, the park is bounded by three large rivers: the Tana to the South, the Ura to the South West and the Rojeweru to the East.

There are several prominent inselbergs of basement rock, notably Mughwango and Leopard Rock.

A section of the park has been designated as a wilderness area in which there are no roads. The park is part of the domain made famous by the writings of Joy Adamson.

East-north-east of Mount Kenya in Meru District of EasternProvince.

Parks are part of Semi-arid zone and have irregular rainfalls.Wet seasonsare April-June and November-December. Rainfallis 635-762 mm in the west and 305-356 mm in the east

Roads: Access from Nairobi (348 km) is via Nyeri-Nanyuki- Meru or via Embu all weather roads. Access into the park from Maua to Murera Gate (35 km) and 348 km from Nairobi. The other access is via Embu to Ura Gate (120 km), 290 km from Nairobi – inaccessible at the moment 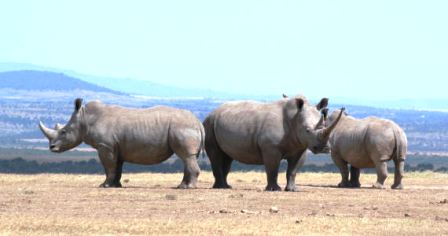