You are Here: Home › Kenya Culture and People › Tanzanian Cuisines and Traditional Dishes

Tanzanian Cuisines and Traditional Dishes are unique compare to other African foods. This site is bringing you all the cuisines served in Tanzania East Africa.

Most food that makes up Tanzanian cuisine is typical throughout all of East Africa. Meat is not widely consumed in comparison with other areas of the continent.

Cattle are normally slaughtered only for very special occasions, such as a wedding or the birth of a baby. Cattle, sheep, and goats are raised primarily for their milk and the value they contribute to social status. When meat is consumed, however, nyama choma (grilled meat) and ndayu (roasted, young goat) are most popular.

The Tanzanian diet is largely based on starches such as millet, sorghum, beans, pilaf, and cornmeal. A meal that could be considered the country's national dish is ugali , a stiff dough made of cassava flour, cornmeal (maize), millet, or sorghum, and usually served with a sauce containing either meat, fish, beans, or cooked vegetables.

It is typically eaten out of a large bowl that is shared by everyone at the table. Wali (rice) and various samaki (fish) cooked in coconut are the preferred staples for those living in coastal communities.

The introduction of various spices by the Arabs is highly evident in a popular coastal dish, pilau . It consists of rice spiced with curry, cinnamon, cumin, hot peppers, and cloves. Matunda (fruits) and mboga (vegetables) such as plantains, similar to the banana, ndizi (bananas), pawpaw (papaya),

biringani (eggplant), nyana (tomatoes), beans, muhogo (cassava), spinach and other greens, and maize (similar to corn) are frequently eaten, many of which are grown in backyard gardens. Ndizi Kaanga (fried bananas or plantains) is a local dish that is very popular with Tanzanians and tourists alike. In the cities, Indian food is abundant.

Chai (tea), the most widely consumed beverage, is typically consumed throughout the day, often while socializing and visiting with friends and family. Sweet fried breads called vitumbua (small rice cakes) are commonly eaten with chai in the mornings, or between meals as a snack.

Adults enjoy a special banana beer called mbege made in the Kilimanjaro region (northeast Tanzania). Aside from the common serving of fresh fruits or pudding, desserts such as mandazi (deep-fried doughnut-like cakes) are sold by vendors.

FOOD FOR RELIGIOUS AND HOLIDAY CELEBRATIONS

The people of Tanzania follow a variety of religions. Roughly one-third of the population is Muslim (believers in Islam) and one-third is Christian. Nearly all of the island of Zanzibar and much of the mainland coastal regions consist of Muslims; most Christians live inland. Hinduism and indigenous beliefs make up the majority of the remaining one-third who believe in a specific religion.

The warm Christmas in Tanzania is a special time for Christians. The majority of people are invited to a guest's house for dinner Christmas night. Pilau (rice dish containing spices), chai , and a chicken, red meat, or seafood dish are usually served.

A traditional walk along the beach following dinner may leave some very wet—Christmas falls during East Africa's rainy season. Ramadan is probably the holiest time of the year for Muslims. During this month-long observance, neither food nor drink may be consumed between sunrise and sunset, often a difficult responsibility in the country's warm temperatures.

Eid al-Fitr , the feast that ends the month of fasting, is always eagerly anticipated by Muslims of all ages. In expectation of the feast, vendors sell cassava chips and tamarind juice made from the tamarind (a flat, bean-like, acidic fruit), and some rush to the stores to purchase plantains, fish, dates, and ready-made bags of ugali for the long-awaited meal.

To make certain the feast can take place (and that Ramadan has ended), many gather around to listen to the radio, hoping to hear that the new moon has officially arrived in the night sky. When it is announced, children often dress up (similar to Halloween in the United States) and walk from house to house for cake and lemongrass tea.

Secular (nonreligious) holidays also produce a lot of excitement. On August 8 each year, Farmers and Peasants Day is celebrated. On this day, the country pays tribute and expresses appreciation to farmers and peasants for helping to feed the country and keep agriculture thriving.

Zanzibar, one of the country's islands, has its own celebration every January 12, marking the anniversary of the island's independence from Britain.

Guests are polite and respectful when visiting a Tanzanian home. Loose-fitted clothing is appropriate attire, since most meals are served to diners seated around a floor mat or low table. Prior to the meal, a bowl of water and a towel may be passed around to the diners to wash their hands.

The bowl is passed to the next person with the right hand, as the left one is considered unclean. The right hand should also be used to dip into the ugali , which is commonly served in a communal bowl before the main meal.

Goat, chicken, or lamb is likely to be served, for those who can afford it. Most families eat meat only on special occasions, such as a wedding. A wali (rice) dish and a vegetableor maharage (beans), may also be served along with chai (tea).

Greens are popular side dishes, and are often prepared with coconut and peanuts (Mchicha) or tomatoes and peanut butter (Makubi). Fresh fruit is the most common after-dinner treat, although sweets such as honey or potato cakes may also be offered.

It is acceptable to leave food on a plate at the end of a meal, as this reassures the host that the guest is satisfied. Eating customs vary throughout the country according to ethnic group and religious beliefs.

However, the typical family meal is almost always prepared by the mother and daughters, usually on a wood or charcoal fire in an open courtyard, or in a special kitchen that is often separated from the rest of the house.

The midday meal is usually the largest, consisting of ugali, spinach, kisamuru (cassava leaves), and stew, though kiamshakinywa (breakfast) is seldom forgotten. Spiced milk tea and freshly baked bread are popular in the morning. Men and women in Muslim households (about one-third of Tanzanians) often eat separately. Taboos may also prohibit men from entering the kitchen at all.

Only a little over half of all children in Tanzania attend primary school, according to UNICEF. As an added incentive to attend school, foreign countries (such as the United States) are helping to offer free lunches to students during the day. The Tanzania School Health Program aims to ensure child health, including the maintenance of clean water and periodic physical examinations.

In addition, the program promotes the growth of school gardens to assist in nutritional education. A typical Tanzanian school lunch may be porridge made of millet, groundnuts (peanuts), and sugar, cooked outside in large kettles over an open fire, often accompanied by milk. 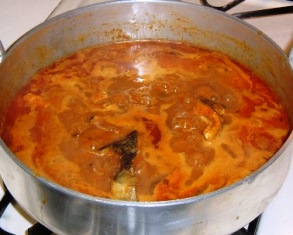