You are Here: Home › Kenya Attractions › Kilwa Beaches in Tanzania

Have ever been to Kilwa Beaches in Tanzania? If no, then your are missing a lot. This site is happy to bring you all the details about Kilwa island and is attractions in Tanzanai.

Kilwa is about 300 km south of Dar-es-salaam on the Tanzanian coast, close to the Selous Game Reserve.

Kilwa was originally established as a centre for the gold and ivory trade. Now a World Heritage Site, it is a home to one of the most spectacular ruins on the East African coast.

Kilwa Kisiwani and the nearby Songo Mnara Islands contain numerous ruins many dating back to the 13th century. Kilwa Masoko is the most developed town and the administrative centre of the district.

Today Kilwa has managed to preserve much of the scenery that attracted Ibn Batuta, Pedro Alvares Cabral, and Vasco da Gama. To preserve its beauty UNESCO declared Kilwa a World Heritage Site in 1981.

Kilwa Kivinje, was in the 19th Century an Arabian slave and ivory trading town, where caravans started off into the interior. With the end of the Arab time at the end of the 19th century, the German colonial government built a fort and extended the town.

From German times one can still find a Market Hall, the big Fort with a canon from the 1st World war, and two pillars one for the tribal dead of the Maji Maji War fought between the local tribes of Southern Tanzania and the German Colonial government and the other for two German traders also killed during the same Maji Maji War.

The main buildings on Kilwa are the Great Mosque and the Great House, the Small Domed Mosque, the Jangwam Mosque, the palace of Husuni Kubwa and the nearby Husuni Ndogo, the Makutani palace and the Gereza fort.

There are also important ruins on nearby islands including Songo Mnara; another island with 14th to 15th Century houses and mosques. Some of which still show high walls and even parts of their roofs & Sanje Majoma and Sanje ya Kate.

Kilwa Kisiwani, is a small island across the water from Kilwa Masoko,this is where one will find the greatest collection of ruins. Directly on the Northern shore one will find the old Omani Fort, which is built on the foundations of the old Portuguese fort, in the early 19th Century, and where still an old wooden door remains.

The Big Mosque is from the 12th Century and was further extended up to the 15th Century. It was said to be the largest mosque in East Africa.

Adjacent to the Great Mosque on the south side is the Great House which mostly dates to the same period as the latest phase of the mosque (i.e. eighteenth century). The purpose of the Great House is not known, but it is likely that at some stage it served as the sultan's residence judging from a royal tombstone found during excavations.

To the south-west of the Great Mosque is the Small Domed Mosque which together with the Jangwani Mosque are the only two examples of a nine-domed mosque in this area. This building probably dates from the mid-fifteenth century

The other nine-domed mosque is of approximately the same date and is known as the Jangwani Mosque; it is located to the south of the Small Domed Mosque.

To the east of the main group of buildings are the remains known as Husuni Kubwa (large Husuni) and Husuni Ndogo (small Husuni). The term Husuni derives from the Arabic term husn meaning fortified enclosure or fortress.

Husuni Kubwa is located on a coastal headland overlooking the Indian Ocean. Husuni Kubwa is a severe-looking building which fits the name Husuni (fort). There is little evidence for dating this structure although it is thought to be contemporary with Husuni Kubwa.

The Gereza or fort is located between the Makutani palace and the Great Mosque. It consists of a roughly square enclosure with two towers at opposite corners. Although there is some evidence that the original structure was Portuguese, the present form of the building seems to be typical of Omani forts.

In addition to sites on Kilwa island there are important sites on nearby islands. The earliest of these sites is Sanje ya Kate, an island to the south of Kilwa where there are ruins covering an area of 400 acres, including houses and a mosque. Excavations have shown that the settlement was abandoned before 1200 and most of the ruins date to the tenth century or even earlier.

To the east of Sanje ya Kate is the larger island of Songo Mnara which contains extensive ruins on its northern tip. The remains date to the fourteenth and fifteenth centuries and consist of thirty-three houses and a palace complex, as well as five mosques contained within a defensive enclosure wall. 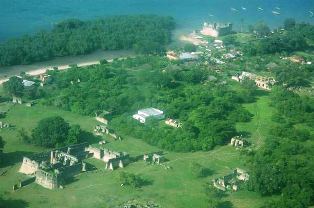