You are Here: Home › Kenya Culture and People › Kenya Respect

Kenya Respect is given the highest priority as far as people’s culture is concerned. Allow us to show you how to respect others while on your vacation in Kenya.

Although Kenya is predominantly Christian and somewhat liberal, there are areas with major Muslim influence, such at the Coastal regions, where it is considered indecent to wear short dresses. This is true in rural Christian areas as well.

Beachwear is acceptable on the beach but not while strolling around town. Even though some hotels allow topless or nude sunbathing, these are in restricted areas and not in public areas.

Kissing or heavy petting is frowned upon in public, even though Kenyan youth engage in both liberally in night clubs.

Homosexuality is against the law but is practiced secretly. Any overt displays of homosexuality may, at times, result in open hostility.

It is best to be discreet if engaging in any such activities with travel mates or locals. However, it is customary to hold a same sex person's hand while engaged in conversation. 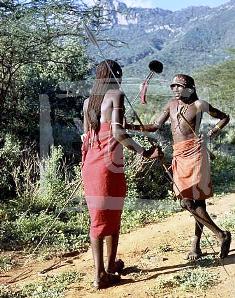