You are Here: Home › Kenya Culture and People › Akamba people of Kenya

Are you looking for information about Akamba people of Kenya? Do you know who the Akamba are?

Do you want free information about the culture of the Akamba tribe in Kenya?

On this page we will give you all you need to know about the Akamba traditions in Africa and Kenya in particular.

The Akamba, classified as ,Central Bantu believe that they exist in their present location because Mulungu (the Supreme Being) projected the first Kamba man and woman on to Mount Nzaui.

They were then joined by another couple from the center of the earth. Mulungu sent rain and the land became fertile. 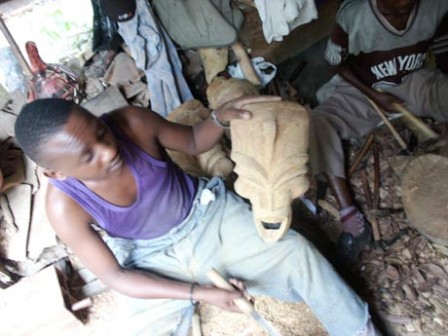 Although there is speculation as to the origins of the Kamba people of Kenya, they likely migrated northward to their present home from Kilimanjaro.

(Other theories are that they branched off from coastal Bantu peoples heading north or came from an ancient dispersal center among the Mijikenda.)

Regardless of their origin, they appear to have been established four centuries ago at Mbooni.

Although they began as hunters who kept some livestock and cultivated the land a little, the higher rainfall and fertile soil of the Mbooni region allowed them to settle down and become agriculturally oriented. They went on to colonize the whole area.

Early trade interaction was mainly with the neighboring Kikuyu, Embu, Tharaka, and Mijikenda and involved arrow poisons and iron implements.

The growth of a second stage in the Kamba economy was signaled by the almost constant arrival of ivory laden Kamba caravans at the coast.

These were traded for glass beads, salt, cloth, and copper, which were taken inland and used for barter. The arrival of the "long snake" (railway) and the Europeans were prophesied by Masaku.

The thriving trading center of Machakos (a corruption of "Masaku") became the primary upcountry administrative center for the British. The Kamba people of Kenya economy declined, however, with a huge loss of cattle to rinderpest, the arrival of the Europeans, and the subsequent ban on further expansion. 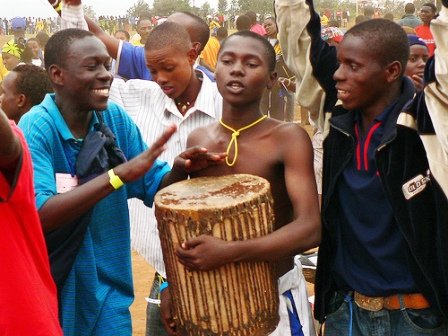 The Music Instruments of the Akamba people of Kenya

With their land no longer fertile, natural erosion and their unwillingness to cut their herds back to numbers the land could support led to periods of famine.

The Kamba are skilled craftsmen and make both practical tools and beautiful artwork Iron and copper wire are used to make bracelets and arrowheads, as well as inlaid stools.

Wood carving is a highly developed Kamba skill (many of the really high quality carvings in Kenya are from Kamba craftsmen), as is the making of baskets from the fibers of baobab and wild fig trees.

The extended family (musyi) forms the basic unit of life among the Kamba. As with many other Kenyan peoples, political power originally resided with the elders (atumia) and in clan meetings (mbai).

The British, however, ended this in practice in the 19th century, imposing appointed leaders instead.

The Kamba of Kenya use both male and female circumcision (which the Kenyan government is trying to eradicate).

Scarring of the chest and abdomen for ornamental purposes is also common. The Kamba people of Kenya, not surprisingly, valued bows and arrows as a primary weapon.

Arrow tips were covered in poison and kept moist by wrapping them in small pieces of leather (which also prevented accidental injury). The long fighting sword (simi) and the throwing club complete the traditional Kamba arsenal.