You are Here: Home › Kenya Culture and People › British Rule

After mandate to administer the former German colony ,the British changed Tanzania to what it is today. Therefore, this page will show you all what happened after the collapse of Germany rule in Tanzania.

The mandate to administer the former German colony was conferred on the United Kingdom under the terms of the Supreme Council of the League of Nations.

With the concurrence of the Supreme Council, the United Kingdom transferred the provinces of Ruanda-Urundi, in the northwest, to Belgium.

These provinces contained three-sevenths of the population and more than half the cattle of the colony.

The boundaries of the East Indies Station were enlarged in 1919 to include Zanzibar and what was the littoral of German East Africa. Dar-es-Salaam remained the seat of Government of the colony and the first Administrator was Sir Horace Archer Byatt CMG.

He embarked it on its course as an African country, improved its health and agriculture and made slavery illegal. He also did much for its economy. In Dar-es-Salaam you can see the house he rebuilt – now lived in by the President.

The native troops went back quietly to their villages and the few Germans that remained were reported as settling down under the new administration.

In 1920, by the Tanganyika Order in Council, 1920, the Office of Governor and Commander-in-Chief of the Territory was constituted.

The colony was renamed Tanganyika Territory in 1920. In 1921 the Belgians transferred the Kigoma district, which they had administered since the occupation, to British administration.

The United Kingdom and Belgium signed an agreement regarding the border between Tanganyika and Ruanda-Urundi in 1924.

The administration of the Territory continued to be carried out under the terms of the mandate until its transfer to the Trusteeship System under the Charter of the United Nations by the Trusteeship Agreement of December 13, 1946.

British policy was to rule indirectly through African leaders. In 1926, a Legislative Council was established, which was to advise the governor.

The British administration took measures to revive African institutions by encouraging limited local rule, and authorized the formation in 1922 of political clubs such as the Tanganyika Territory African Civil Service Association.

In 1926 some African members were unofficially admitted into the Legislative Council and in 1929 the Association became the Tanganyika African Association which would constitute the core of the nascent nationalist movement.

In 1945 the first Africans were effectively appointed to the Governor's Legislative Council.

Under British rule, efforts were undertaken to fight the Tsetse fly (a carrier of sleeping sickness), and to fight malaria and bilharziasis; more hospitals were built.

In 1926, the Colonial administration provided subsidies to schools run by missionaries, and at the same time established its authority to exercise supervision and to establish guidelines.

Yet in 1935, the education budget for the entire country of Tanganyika amounted to only (US) $290,000, although it is unclear how much this represented at the time in terms of purchasing power parity. In 1933, Sir Horace Hector Hearne was appointed as Puisne Judge, Tanganyika Territory, and acted as Chief Justice of Tanganyika in 1935 and 1936. He held the post until 1936/1937 when he went on to be a similar job in Ceylon.

The British Government decided to develop wheat growing to help feed a war-ravaged and severely rationed Britain and eventually Europe at the hoped-for Allied victory at the end of the Second World War.

An American farmer in Tanganyika, Freddie Smith, was in charge, and David Gordon Hines was the accountant responsible for the finances.

All the machinery was lend/lease from the USA, including 30 tractors, 30 ploughs, and 30 harrows.

There were western agricultural and engineering managers. Most of the workers were Italian prisoners of war from Somalia and Ethiopia: excellent, skilled engineers and mechanics.

The Ardai plains were too arid to be successful, but there were good crops in the Kilimanjaro and Ngorongoro areas.

British colonial policy in the 1940s and 1950s encouraged the development of farming co-operatives to partially convert subsistence farmers to cash husbandry.

Before co-operatives, the farmers sold their produce to Indian traders at poor prices. The responsible colonial officer David Gordon Hines from 1947 to 1959 achieved the vast expansion of the co-operatives.

Co-operative offices throughout the country showed the members how to elect committees, keep their books, and market produce.

Co-operatives formed "unions" for their areas and developed cotton gineries, coffee factories, and tobacco dryers. A major success for Tanzania was the Moshi coffee auctions that attracted international buyers after the annual Nairobi auctions.

In the early 1950s the Mau Mau movement of violent resistance to British rule was active in neighbouring Kenya.

The Tanganyika government expected the violence to spread to Tanganyika, especially in the north where the Wa-Chagga live — but violence did not spread there from Kenya.

In 1954, Julius Nyerere, the future leader of Tanzania, who was then a school teacher and one of only two Tanganyikans educated abroad at the university level, organized a political party—the Tanganyika African National Union (TANU). 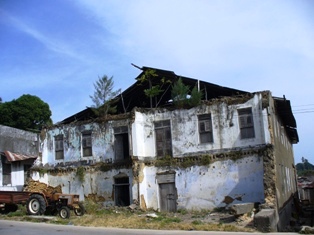