Are you hungry for Tanzania Recent History? This page is giving you all the information of Tanzania history since independence 1963 to present day.

To form a sole ruling party in both parts of the union, Nyerere merged TANU with the Zanzibar ruling party, the Afro-Shirazi Party (ASP) of Zanzibar to form the CCM (Chama cha Mapinduzi-CCM Revolutionary Party), on February 5, 1977. The merger was reinforced by principles enunciated in the 1982 union constitution and reaffirmed in the constitution of 1984.

Nyerere used the Preventive Detention Act first to suppress trade unions and then to lock up any opponents when he wanted. People disappeared and total numbers were never published, but victims are estimated at thousands. International human rights organizations such as Amnesty International campaigned against repression in Tanzania.

Tanzania turned from a nation of sustenance farmers into a nation of starving collective farmers.Scope of the state expanded rapidly into virtually every sector. In 1967, nationalizations transformed the government into the largest employer in the country. It was involved from everything from retailing to import-export trade and even baking. This created an environment ripe for corruption.

A foundation for systemic corruption had been laid. Officials became widely known as Wabenzi ("people of the Benz").Nyerere's Tanzania had a close relationship with the People's Republic of China.

In 1979 Tanzania declared war on Uganda after the Soviet-backed Uganda invaded and tried to annex the northern Tanzanian province of Kagera. Tanzania not only expelled Ugandan forces, but, enlisting the country's population of Ugandan exiles, also invaded Uganda itself.

On April 11, 1979, Idi Amin was forced to quit the capital, Kampala, ending the Uganda-Tanzania War. The Tanzanian army took the city with the help of the Ugandan and Rwandan guerrillas. Amin fled into exile. By the mid-1979 corruption reached epidemic proportions as the economy collapsed.

Socialism left the country as one of the poorest and the least developed. Dependency on foreign aid had become one the world's highest.

In October 1985 Nyerere handed over power to Ali Hassan Mwinyi, but retained control of the ruling party, Chama cha Mapinduzi (CCM), as Chairman until 1990, when he handed that responsibility to Mwinyi. In 1990 a coalition of ethnic and cultural groups of Zanzibar demanded a referendum on independence. They declared that the merger with the mainland Tanzania, based on the now dead ideology of socialism, had transformed Zanzibar from a bustling economic power to a poor, neglected appendage. Their demands were neglected.

However, the ruling party comfortably won the elections amid widespread irregularities and its candidate Benjamin William Mkapa was subsequently sworn in as the new president of Tanzania in the country's ever multi-party election on 23 November 1995.

Contested elections in late 2000 led to a massacre in Zanzibar in January 2001, with the government shooting into crowds of protesters, killing 35 and injuring 600. In December 2005, Jakaya Mrisho Kikwete was elected the 4th president for a five-year term.

One of the deadly 1998 U.S. embassy bombings occurred in Dar Es Salaam; the other was in Nairobi, Kenya. In 2004, the undersea earthquake on the other side of the Indian Ocean caused tsunamis along Tanzania's coastline in which 11 people were killed. An oil tanker also temporarily ran aground in the Dar Es Salaam harbour, damaging an oil pipeline.

In 2008, a power surge cut off power to Zanzibar, resulting in the 2008 Zanzibar Power blackout. 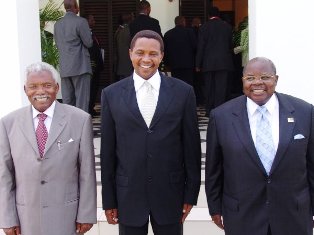