I have always had great comment every time I send a client to Olumara Tented camp in Nairobi City, so When I got the opportunity to visit I was very excited.

The journey to the camp was a game drive of its own, upon arrival we were given hot towels,

the staff was very welcoming, i loved the bridge across the river to the camp [though I have fear of heights this one was very stable].

Upon nearing the restaurant we were given a refreshing cold juice [good as it was very hot]
we were checked into our rooms and after freshening up we had a bush lunch it was buffet,
The pork was soo salivating! Thumbs up to the chef.

All the while, Mr.Godfrey the manager was checking up on the entire guest there.
That day was superb for us as we enjoyed the morans dancing over diner and the bonfire, and tales from a local maasai.

George had great service and another waiter whom i don’t recall his name, but the service was great!

Let talk about my room [rhino] it was the biggest spacious tent I have ever slept in a while, the bathroom was cute I just had to take a photo before messing everything up.

The following day we had coffee very early and headed for morning gamedrive the maasai guide was great and new where to find what.

One of the things I liked was being welcomed to a bush lunch that was such a reward after the long drive.

Apparently, the camp is all surrounded by bush and a river that acts as the fence.

We never stopped hearing the birds chirping and the monkeys especially during the bush lunch.

There is a way that they served the steak and the pork was exceptionally grilled.

I was told that the chef was called David. I also liked Godfrey the camp Manager, he is always with guests.

I was very envious of a couple that told us of how earlier in the day during their game drive they had seen a hippo give birth and a leopard with a fresh catch and they were calling it "the experience of life and death".

I enjoyed my stay in your camp guys and I am sure coming back soonest! 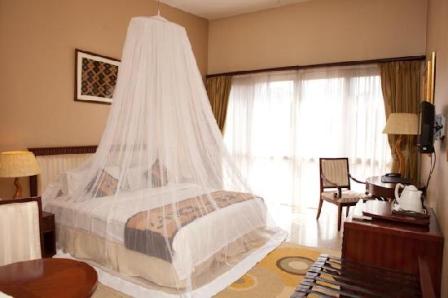