Are you eager tyo know more about Tanzania Bagamoyo Travel destinations, This page will guide you about all attractions of this slave city in Tanzania Africa.

It is a town on the Tanzanian coast, about 75 km north of Dar es Salaam.

It is one of the so called young Swahili towns and was founded in the late 1700s when Moslem families related to the ruler of Oman settled here.

In the 19th century, this became in important town for trade in ivory and slaves for the Arab market.

The slave trade route through the interior of the country from Lake Tanganyika ended here. In 1868 Catholic missionaries were allowed to settle and their history can be studied in the Catholic museum.

By the end of the 19th century Bagamoyo was the most important town on the coast, and the German colonialists made it their capital.

However, in 1891 they moved the capital to the new city Dar es Salaam, and the importance of Bagamoyo subsequently declined, particularly after the railway had been built from Dar es Salaam westwards.

A few kilometres south of Bagamoyo are the Kaole ruins, including two mosques, which were excavated in the 1950s.

There are also remnants of a few tombs from the 13th century Although a number of European explorers started their expeditions in Bagamoyo, David Livingstone did not come to the town until his body was carried there after his death for further transport to Zanzibar and London.

A number of stone buildings from the German times have been restored in recent years. There is also a German burial place. 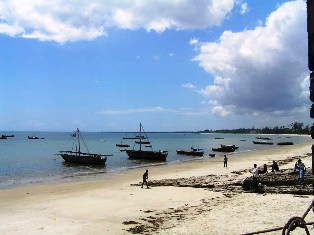