Compared to other top beach destination in Tanzania Bagamoyo beaches are less traveled. Next time you plan to visit Tanzania make sure you don't miss a beach holiday at bagamoyo Tanzania.

This is because Bagamoyo was recently designated as Tanzania’s seventh world heritage site and is the oldest town in Tanzania. Bagamoyo's history has been influenced by Arab and Indian traders, the German colonial government and Christian missionaries.

This small town has played various historical roles in Tanzania. Apart from being a slave and ivory port, it was also a German headquarter in 1891.

Explorers such as Burton, Speke, Grant, Livingston and Stanley all passed in this town.

The name Bagamoyo comes from Swahili words "bwaga moyo" (throw down your heart), a despair expressed by people who were captured as slaves of knowing that they face a long uncertain future.

Lies 75 kilometers north of Dar es Salaam This famous old slave trading station on the mainland coast opposite Zanzibar used was the starting point for many of the best-trodden caravan routes into the interior.

Now much faded, Bagamoyo remains an interesting place to visit and there are some beautiful unspoilt beaches. Visitors enjoy a combination of cultural, historical and natural attractions.

The town, which lies beside beautiful Indian Ocean beaches, has several points of interest which can be visited over the course of two days.

The German and Mwanamakuka cemeteries, located 200 meters from the Indian Ocean. The tombs at Mwanamakuka were built in traditional Arab style, and the oldest dates back to 1793.

The Chuo cha Sanaa, or College of Arts, is located next to the cemetery.

Other points of historical interest in Bagamoyo include Kaole Ruins, the German Boma and the German hanging place.

The Kaole ruins are the remains of a Shirazi trading town. They date back to the thirteenth century.

The ruins are of two mosques and several tombs. The buildings were constructed using coral stones. The site claims to be home to the first mosques in east Africa. In addition to the ruins, there is a small museum.

The first Catholic church at the mission was built in 1868 and in 1874, Dr. Livingstone’s body stayed at the Catholic mission before being sent to England for burial.

The Bagamoyo Museum is located at the mission, and the town’s history is explained in detail at the museum. 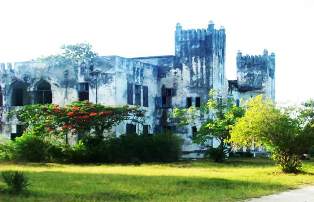