The meaning of Tanzania Flag

You are Here: Home › Kenya Culture and People › Tanzania Flag

If you have never know the meaning of Tanzania Flag, this page will guide to know and differentiate the colours of the Flag of Tanzania.

The flag of Tanzania was adopted in 1964. It derives from the flags of Tanganyika and Zanzibar. The flag is divided diagonally by a yellow-edged black band from the lower hoist-side corner. The upper triangle (hoist side) is green and the lower triangle is blue.

• The green colour in the flag represents the natural vegetation present in the country.

• The yellow colour represents rich mineral deposits of the country.

• The Black colour represents the skin color of Tanzanians

• The blue colour represents the numerous lakes and rivers and the Indian ocean.

The flag of Tanzania consists of five diagonal stripes. The top stripe is green, the bottom is an equal-sized blue stripe, and the middle stripe is black with a thin yellow stripe above and below it.

The green stripe symbolizes agriculture and the fertility of the land. The black represents the citizens of Tanzania. The blue stripe stands for the Indian Ocean which is on Tanzania's eastern coastline, and the yellow stripe represents the country's mineral wealth.

Even though Zanzibar united with Tanganyika to form Tanzania in 1964, the island is planning to introduce its own flag before the end of 2004. 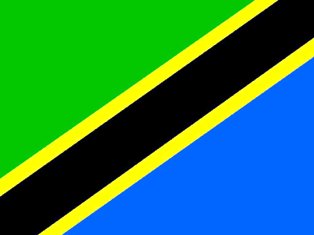