You are Here: Home › Kenya Business and Investment › Rwanda Business Questions and Answers

Rwanda Business Questions and Answers or Rwanda Frequently Asked Questions (FAQ) are answered on this page . Worry no more because we will answers any question you may ask about starting a business in Rwanda .

Rwanda is located at the heart of Africa. The country of Rwanda is situated in central Africa immediately south of the equator between1°4’ and 2°51’ south latitude and 28°63’ and 30°54’ east longitude.

Rwanda is in the Central African Time Zone (GMT + 2). It has an average elevation of 2740m above sea level

2. Who Governs Rwanda and How Is She Governed?

Rwanda is a republic, governed by an executive, a legislative and a judiciary system.

The 26 member Senate and the 80 member lower chamber of deputies is the legislative and provide oversight on government. The Senate is headed by the President of the Senate

Rwanda strives at Good Governance as one of the pillars for development and volunteered to be evaluated by the New Partnership for African Development (NEPAD) peer review mechanism for good governance.

Rwanda strives for a decentralized, non-corrupt government with a private sector driven economy and a social structure that is inclusive of all that reside in it.

3. How has the Rwandan Economy Performed?

The Government of Rwanda’s fiscal policy is aimed at strengthening and consolidating macroeconomic stability while providing adequate resources to the productive and social sectors in line with the country’s Economic Development and Poverty Reduction Strategy (EDPRS).

The country places no restrictions unique to foreign investors in terms of nature of investment, sector of investment, mandatory co ownership of investment projects with local investors and repatriation of profits and foreign exchange controls.

The government strongly encourages export driven foreign investment and has put in place incentives for foreign investors.5. What is the population size and demographical characteristics of Rwanda?

Rwanda has a population of 9.3 million people (2008 est.). In 2002, the Rwanda General Population and Housing (RGPH) Census estimated a population growth of 2.6 %Source: Ministry of Finance and Economic Planning (MINECOFIN)

There are three national languages widely spoken in Rwanda and these are Kinyarwanda, French and English.

An estimated 54.6% of the total population of Rwanda is between the ages of 10 and 44. With 32.8% of the population being below 10 years of age and the remaining being 45 yearsSource: National Institute of Statistics of Rwanda – Health and Demography Survey 2005

52% of Rwandans are women and 48% are men.Source: National Institute of Statistics of Rwanda – Health and Demography Survey 2005

Majority of Rwandans are Christians with Roman Catholics having the largest representation. However, the constitution protects an individual’s right to practice their religion in a manner consistent with their beliefs.

Under Article 33 of Rwanda’s Constitution “Freedom of thought, opinion, conscience, religion, worship, and the public manifestation thereof is guaranteed by the State in accordance with conditions determined by law.

6. What is RDB Business Operations and Services (BOS)

RDB Business Operations and Services represents a core division of the organization that performs, among other business, the responsibilities of the former Rwanda Investment and Export Promotion 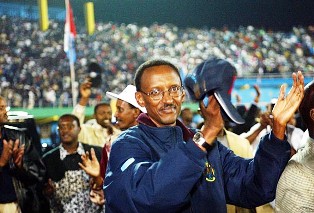