You are Here: Home › Kenya Business and Investment › private sector

By African standards, Kenya has a very substantial private sector, including a significant number of foreign investors and is touted as one of the most resilient in the world.

The country has always been a market economy, and it escaped both the dislocation caused in Uganda by the expulsion of the Asians in the late 1970s and the problems created by the socialist experiment in Tanzania from the 1960s through the 1980s.

The import substitution policies of the 1960s and 1970s led to considerable diversification of the economy,

The domestic private sector has been concentrated in certain kinds of manufacturing (mainly food-related) for both the domestic and the regional market.

FDI has recently played key roles in the horticultural industry (for export to the European Union) and certain service areas: transport, tourism and mobile telephony.

Key players in voicing private-sector concerns include the following bodies.

The Kenya Private Sector Alliance, formed in 2003, is the umbrella organization of over 200 private-sector organizations in Kenya.

Its objectives include the following: to enable the private sector to have a strong impact on socio-economic development through a collective effort; to create a harmonized approach to cross-sectoral issues; to ensure the formulation of policies that encourage both domestic and foreign investment; and to pursue regional, continental and international economic opportunities.

The Federation of Kenya Employers (FKE)

The Federation of Kenya Employers was registered under the Trade Unions Act in January 1959 as an association representing the collective interests of employers.

Its major objectives are to harmonize and defend employers’ interests and to raise the social consciousness of employers so as to enable them to realize the full potential of their enterprises by promoting increased labour productivity, sound management techniques, better industrial relations, fair labour practices, effective work organization and stronger staff motivation.

The Kenya Association of Manufacturers (KAM)

The Kenya Association of Manufacturers is the leading organization of industrialists in Kenya.

It was constituted in 1959 to unite industrialists under a powerful umbrella organization to encourage investment, uphold standards, and represent their views and concerns to the Government.

Ordinary membership is restricted to persons, firms and companies directly engaged in manufacturing, processing or any other productive method.

Associate membership is extended to other companies and firms that, by the very nature of their business, have a direct interest in the expansion of industry, including financial institutions, insurance companies and consulting firms.

The Eastern Africa Association was established in 1964. Members include companies from India, South Africa, the United Kingdom and the United States, among others.

The EAA is headquartered in London and acts as a channel of communication between foreign investors and Eastern African governments.

It interprets the policies and objectives of governments to its members and, in turn, explains the views and needs of investors, prospective investors and foreign businesses generally to governments.

It has a strong presence in the EAC but is also present in a number of other countries, including Ethiopia and Madagascar.

The East African Business Council is the umbrella organization for businesses in East Africa. It has three categories of membership.

One category consists of chambers of commerce, manufacturers’ associations, employers’ federations and organizations in the banking, tourism, insurance, agriculture and transport sectors.

It is broadly acknowledged that one key reason policy implementation has been weak in Kenya is that there are no clear channels through which stakeholders can provide feedback to the Government on its implementation record.

Achieving the goals the new Government has set for itself requires a strengthening of partnerships among government, business and civil society.

It is with this recognition that the National Economic and Social Council (NESC) was formed to serve as an advisory body to the Government.

The Council is mandated to provide timely, accurate and independent economic and social advice with a view to improving the management of the economy.

It also provides a consultative platform that can improve coordination between the Government and the private sector through ongoing engagement.

The specific responsibilities of the Council include the following:

• To create a forum in which government, business and labour unions can identify and discuss policy issues and make recommendations consistent with the development aspirations of the country.

• To appraise the various programmes and activities of the Government in the light of Government policy.

• To improve the targeting and addressing of strategic objectives with a focus on the most critical social and economic needs.

• To utilize private-sector and civil society capacities and synergies through collaboration, engagement and networking in order to promote efficiency and effectiveness in economic planning. 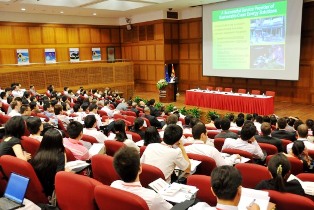