There is no formal censorship, but some media has been subject of pestering by members of the government.

Kenya has a great local and international post service, you can buy stamps at post offices, many stationers, shops and lodges also sell stamps.

There are post boxes (its are red) and post offices spread around the country, main post offices are open from 08:00 to 17:00 (Monday to Friday) and from 09:00 to 12:00 on Saturdays. Rates vary according to the weight, air letters and size of the letter or postcard.

Airmail service to Western Europe is very reliable, it takes about four days.

Kenya Media and Communication with Internet :

There are good Internet Service in Kenya, Internet is offered in many lodges, there are also Internet cafes and business centres offering fast Internet access.

Kenya Media and Communication with Telephones :

International calls can be made directly or with the help of an operator dialing 0196. Many hotels offer international calls service, but usually the service is expensive, the best option is to call in a telecommunication centre, there are plenty of them in larger towns or also using public phones; red public telephones work with coins (you should have some change for local calls), blue public telephones work with phone cards.

The good cellular network of Kenya cover most tourist areas and main towns, so you can use your mobile phone.

The main service providers are Celtel, its service cover the area of Mombasa, the coast and the southwest of Kenya and Safaricom, which has coverage on Mombasa, Nairobi and in the southeast of the country. By 2005, there were 281,800 mobile phones in use in Kenya.

Kenya Media and Communication with Press :

Nairobi is the main publication center of newspapers. By 2002, there were five leading daily newspapers:

•The Daily Nation, published in English Language, was founded in 1960, had a circulation of 170,000 every day.

•The East African Standard, a weekly newspaper in English Language sold through out Kenya, Tanzania and Uganda, had a daily circulation of 70,000.

•The Kenya Times, in English Language too, had a daily circulation of 52,000.

•Taifa Leo, published by the Nation Media Group, is a Swahili newspaper, had a daily circulation of 57,000.

•Kenya Leo, published in Swahili language, had a daily circulation of 40,000

Nowadays, the main Television stations in Kenya are:

•The leading television station Kenya Television Network (KTN), was the first to break the state broadcasting monopoly. Its signal is available in cities such as Eldoret, Kisumu, Nairobi, Nakuru and Mombasa.

•Other private channels are: Stella TV (STV) and Citizen TV.

Kenya has several Radio Stations, by 2001, there were 24 AM, 18 FM and 6 Short-wave radio broadcast stations. These broadcast in English, Swahili and other local languages. By 2000, there were 223 radios for every 1,000 people

The most important radio stations in Kenya are:

•The State-Owned Kenya Broadcasting Corporation (KBC), with programs in English, Swahili and other local languages.

•Metro FM is a music station operated by KBC.

•CRI 91.9 FM, is a part of China Radio International, with language-based programs in Swahili, Mandarin and English.

•Radio Citizen, it operates in Swahili, also broadcasts in Kikuyu-language and luo-language.

•Capital FM, is one of the most popular music stations. 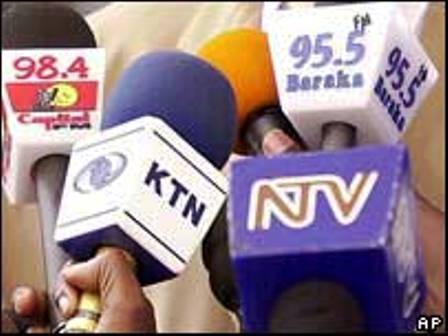