You are Here: Home › Kenya Culture and People › War with Germany in East Africa

Do you know what exactly happened at the War with Germany in East Africa ? It was the worst time for the Tanzanian People and this page bring you all the history in details.

During World War I, an invasion attempt by the British was thwarted by German General Paul von Lettow-Vorbeck at the Battle of Tanga, who then mounted a drawn out guerrilla warfare campaign against the British.

At the outbreak of the First World War the German authorities regarded the position of their premier Colony with considerable equanimity although it was inevitably cut off from outside communication. It had been organized against any attack that could be made without those extensive preparations.

For the first year of hostilities the Germans were strong enough to carry the war into their neighbours' territories and repeatedly attacked the railway and other points in British East Africa. However, British rule had begun with the occupation of the island of Mafia by the Royal Navy in 1914.

The forces at the disposal of the German Command may never be accurately known. Lieutenant-General Jan Smuts at one time estimated them at 2,000 Germans and 16,000 Askaris, with 60 guns and 80 machine guns, but this should prove to be below the mark. The white adult male population in 1913 numbered over 3,500 (exclusive of garrison), a large proportion of these would be available for military duties.

The native population of over 7,000,000 formed a reservoir of man-power from which a force might be drawn limited only by the supply of officers and equipment. There is no reason to doubt that the Germans made the best of this material during the long interval of nearly eighteen months which separated the outbreak of war from the invasion in force of their territory.

In his final despatch of May 1919, General Jacob van Deventer placed the German forces at the commencement of 1916 at 2,700 whites and 12,000 blacks. Lord Cranford, in his foreword to Captain Angus Buchanan's book on the war, writes, "At his strongest von Lettow probably mustered 25,000 to 30,000 rifles, all fighting troops", with 70 machine guns and 40 guns.

After eighteen months of continuous fighting, General van Deventer estimated the enemy's forces at 8,000 to 9,000 men.Cut-off from Germany by the Royal Navy Von Lettow made a virtue of necessity and conducted a masterly guerilla campaign, living off the land and moving swiftly to repeatedly surprise the British.

The British, who deployed large numbers of Indian Army troops under Smuts, faced difficult logistic problems supplying their pursuing army deep in the interior, which they attempted to overcome by the formation of a large Carrier Corps of native porters.

Another point bearing on the war and duly emphasized by General Smuts in his lecture before the Royal Geographic Society (January 1918), was the extraordinary strength of the German frontier. The coastline offered few suitable points for landing and was backed by an unhealthy swamp belt.

On the west the line of lakes and mountains proved so impenetrable that the Belgian forces from the Congo had, in the first instance, to be moved through Uganda. On the south the Ruvuma River was only fordable on its upper reaches. And the northern frontier was the most difficult of all.

Only one practicable pass about five miles (8 km) wide offered between the Pare Mountains and Kilimanjaro, and here the German forces, amid swamps and forests, had been digging themselves in for eighteen months.

The Honorable H. Burton, speaking in London in August 1918 said, "Nothing struck our commanders in the East African field so much as the thorough, methodical and determined training of the German native levies previous to the war."

The force which evacuated the Colony in December 1917, was estimated at the time at 320 white and 2,500 black troops; 1,618 Germans were killed or captured in the last six months of 1917, 155 whites and 1,168 Askaris surrendered at the close of hostilities.

A skillful and remarkably successful guerrilla campaign waged by the German commander Paul Emil von Lettow-Vorbeck kept the war in Tanganyika going for the entire length of the First World War. A scorched earth policy and the requisition of buildings meant a complete collapse of the Government's education system, though some mission schools managed to retain a semblance of instruction.

In 1924, ten years after the beginning of the First World War and six years into British rule, the visiting American Phelps-Stokes Commission reported: In regards to schools, the Germans have accomplished marvels. Some time must elapse before education attains the standard it had reached under the Germans.

But by 1920, the Education Department consisted of 1 officer and 2 clerks with a budget equal to 1% of the country's revenue — less than the amount appropriated for the maintenance of Government House. 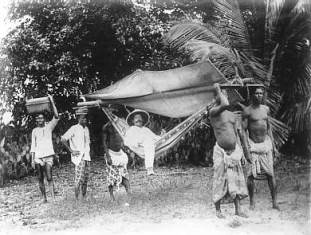