You are Here: Home › Kenya Culture and People › Kenya people

Do you need information about Kenya people? Do you know how many tribes are in Kenya?

Do you want to know the local culture and general norms of Kenyan citizens? On this page we will guide you to show you all the tribes in Kenya.

Present day archaeological evidence suggests that some two million years ago, man's ancestors roamed an area in the very north of Kenya, in the region of Lake Turkana near Kobi Foora.

Hominid fossil finds dating back that far have earned Kenya the sobriquet "The Cradle of Mankind".

Nevertheless, natives of Kenya are almost entirely immigrants whose ancestors reached the country less than 10,000 years ago.

Oral and linguistic evidence indicates that Kenya has been the focus of three major immigrations:

In the beginning, the Cushites from the north and northeast - from current day Ethiopia arrived some 9000 years ago.

The Cushites who were divided into the southern and eastern groups occupied, unchallenged, the northern half of the country until a movement of Nilotes entering Kenya west of Lake Turkana began a period of interaction with their hosts and later the displacement of the southern Cushites to what is now Tanzania.

`The development of these mixed societies led to the Nilotic immigrants being divided into two groups - the Plains Nilotes and the Highland Nilotes.

A later immigration (around 500 years ago) of Lake Nilotes, from the direction of what is now Uganda, led to a further Nilotic settlement around Lake Victoria.

Currently there are more than 40 different ethnic groups in Kenya.

The main groups of tribes are the Bantu who migrated from western Africa, the Nilotic people who originated from Sudan and the Hamitic group, who were mainly pastoral tribes from Ethiopia and Somalia. The main tribes are Kikuyu (21%), Meru (5%), Kalenjin, Luyha, Luo (14%), Kisii, Kamba, Swahili, Masai, Turkana

The other large ethnic groups include the Luo, Luhya, Kamba and Kalenjin- There are also some groups of people who form a very small population. This includes the tribe of El Molo. 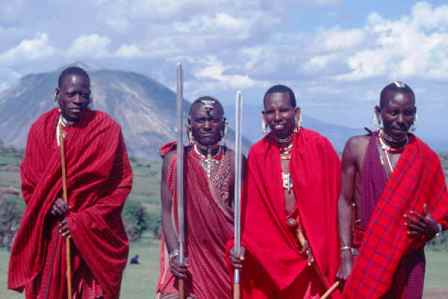