We had booked our safari as part of the Thomson/First Choice package hence had no choice of lodges.

(Plus we had changes to elements of the itinerary at the last minute).

Our third stay was two nights at the Tloma Lodge.

The approach is uphill along up a sandy red road but on going through the gates what a surprise, the hotel is set in wonderful gardens which are expertly managed.

(Just to say though I felt really guilty as not far from the gates is the communal water storage where people, including small children were getting their water, can’t quite equate this with such a splendid Lodge being so close to what is a poor standard of living for locals but I guess that isn’t the Lodge’s fault.)

The hotel was originally a coffee farm and still has coffee bushes.

The staff were welcoming and showed us to a room quite near to the reception.

The room was large, we had two good sized double beds.

The shower room was also a good size, we found the rubber doormat used as slip prevention in the shower very hard on the feet.

My only complaint was that we could hear every word said in the next door room!

There is a gift shop on site.

Drinks are available from the bar and coffee tea and cakes were around during the afternoon.

Meals were good with choices for meat eaters and vegetarians.

In the morning you make up your own lunch boxes which I think is a great idea.

You can choose to dine inside the dining are or outside on the deck.

From the deck area there is a pleasant view to the mountains over tree tops.

One evening we sat watching lightning flashing over the Ngorogoro crater.

If I have any gripes it is that the Lodge is a long way from the parks but in my opinion the standards and ‘greenness’ of the Lodge makes up for it. A very relaxing Lodge 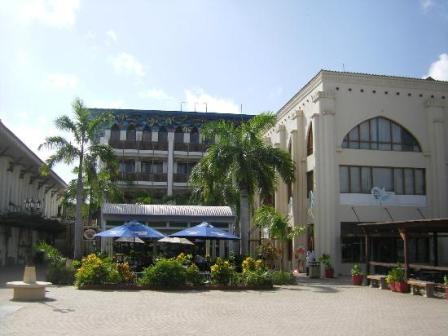