Though Ngorongoro Rhino Lodge is not on the rim of the Crater and you do not have the breathtaking views of it, it is really worth staying.

Located in the lush of the rainforest, with resident marabus who greeted us in the afternoon on the arrival and antelopes who said farewell to us in the early morning dusk.

The rooms were basic but clean, with a lovely balcony where we sat and watched some water bucks who were grazing right in front of us.

The building is an old homestead I think, but it has been nicely renovated with charming little wood burning stoves in each of the bedrooms.

The bathroom was clean and basic, but much to our surprise it had an amazing shower!

After days of unreliable and weak showers we were both very surprised by perfect very hot and powerful showers.

It was all we could do not to stay there for ages, but the signs did say not to use too much water!

Food was good, and the lounge with it's big fire was very welcoming. The owner was also very sweet, and on discovering we were on honeymoon he gave us a really nice little gift, which really was the icing on the cake.

It's not a fancy hotel, and if you want 5 stars and massive buffets for dinner this isn't for you - but for somewhere that feels genuine and charming, which still providing good quality basics I can't recommend Rhino Lodge enough 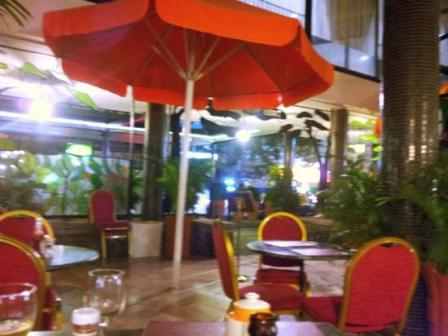