Mikumi Wildlife Camp really is a great stay because of the location from Dar and the location in the park itself.

I am the designated driver so I really like stay in this place while the others drive around.

The chances are you will eventually see the same animals. It's great for long weekends. 1 night is enough.


We (a group of 30 of us) travelled from Dar Es Salaam by Dalla Dalla (recommended for the brave only) to fit in a Safari due to the limited time we had in Tanzania.

Travel took us longer than we expected by on arrival (late!) we were met by Morgan and his welcoming team who provided us with a drink and late lunch.

Other Hotels and Vacation Villas

Throughout our stay, nothing was a problem and we were looked after well by the staff. They were flexible and met all our requests including a boxed lunch so we were able to leave early enough for our journey back to Dar.

Accommodation is basic by its nature, however more than adequate and each had a lovely view over the plain providing a great all round experience.

We enjoyed the evening watching the bush babies in the tree tops and honey badgers from the decking over several glasses of wine from the bar. The experience of sleeping through an African thunder storm was something else!

The Afternoon and Morning drives were hosted expertly by knowledgeable guides. Humphrey was our group's guide and his ability to spot things of interest from such a distance was impressive.

We saw Giraffe, Elephant, Zebra, Impalla, Wildebeast, Buffalo, Hippo, Crocodile, Wild Dog and Babboon, and evidence of Cheetah. There were lions around, however we were unable to get close enough, however one of our other groups caught a glance.

I would thoroughly recommend the experience to anyone (small or larger groups) who only have a short time.

It is easily accessible from Dar (it should be a 4 hr journey but depending on how you travel, you should allow another 2+ hours if you go for the genuine Dalla Dalla experience) and if I did it again I would arrange for a 4WD and driver rather than the more traditional means!

A night at Mikumi Wildlife Camp in Mikuni National Park will be a night to remember. Welcome to Mikumi Lodge in heart of Mikumi game reserve Tanzania. Mikumi Safari Camp, which is also known as Kikoboga, is at the centre of Mikumi National Park situated just 300 metres from the main east-west Tanzania highway.

The camp has commanding views across the Mkata Flood Plains and is within easy reach of some of the more interesting areas of the park including the hippo pools.

Mikumi Wildlife Camp is a delightful base in the bush from which to enjoy a large variety of wildlife species. It has spacious cottages with en-suite facilities.

All are comfortably furnished, well-ventilated and all have additional guest rooms suitable for family and friends. All cottages have large verandahs overlooking the nearby waterholes. Further on to the plains is a small sun deck around a swimming pool and an observation tower. 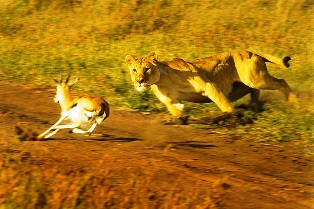