You are Here: Home › All Hotels › Ngorongoro Hotels › Lemala Ndutu

After staying in luxury lodges for 10 nights, we were off to Lemala Ndutu.

Coming from Lake Manyara, we went through Ngorongoro Crater to the Serengeti to the Lemala Ndutu Camp.

This is a mobile camp and the drive out there is extremely scenic.

Once we arrived at Lemala Ndutu we had grown accustomed to a pretty high standard of camps and lodges.

At first it was a bit of adjustment, especially being as removed as you are in Ndutu.

But this changed quickly. The staff at Lemala Ndutu does more with a temporary camp than anyone would think possible.

The tents have their own bathrooms with hot water on call, vanities and flushing toilets.

The camp is located in the bush with elephants and buffalo walking through the camp at all hours of the night.

The staff prepares 5 star restaurant meals with nothing but solar power and coal.

The oven used for baking is all coal, but produces amazing meals.

The kitchen set up is worth the tour! On both nights birthdays caused cakes to be brought out, and the entire staff came out singing, and entertaining. It was truly unbelievable, especially considering we were camping.

At night we were walked and zipped up in our tents, and never so much as saw a mosquito.

The tents themselves had very comfortable king sized beds, with electric lighting, and wood floors.

The staff was always ready to go with a beer, a glass of wine, or anything else you needed (including great conversation). In the evenings everyone would sit around the bush TV (fire pit) while you were served drinks and exchanged stories from the day.

On the first morning the staff knocked on our tent for the 5am wake up call for a hot air balloon ride.

It was dark and very cold, but when we got out to the balloon it was all worth it.

Once up in the air we had unbelievable views of Ndutu and the Serengeti.

We saw Giraffes, Lions, and Wildebeest and Zebra.

The colors were beautiful, and the captain made sure that everyone in the balloon could see at every angle. Because of some winds we encountered we went very high into the air.

This gave us a chance to see so much, and to move a bit more slowly. When we came down we were greeted with the best breakfast we have ever had.

Right inside the migration a beautiful table with linens was set up for us, where champagne was served with a full English breakfast on fine china, with silver.

There we enjoyed breakfast with all from the balloon, and the captain. This was a great experience. (cost is additional but ask Ndutu or your travel agent to book this, worth the money)

Our driver picked us up and ready to go for our first game drive in the Serengeti and Ndutu.

We were on the hunt for a pride of eight lions we had seen from the hot air balloon, and our pilot had told our driver approximately where we could find them.

As we were driving we came across about fifteen safari vehicles all looking out at something.

At first we thought it was just the front of the migration, but then our driver spotted the Cheetah, three of them.

They were on the hunt, and next thing you knew they were racing at full speed.

As the Cheetah ran we were driving full speed along with the other safari vehicles.

The three Cheetah chased down and caught a wildebeest, and our driver put us right into the action.

We were in a circle with the other vehicles, snapping photos as the three brothers first killed then ate the wildebeest.

Upon returning from this amazing drive, we relaxed, had showers, a few drinks, and enjoyed the tent and the camp.

Another amazing dinner, drinks, and entertainment (including a comedy show) were experienced this evening.

Everyone shares their amazing stories from the game drives and the overall experience is fantastic.

Upon leaving, we had a wonderful box lunch prepared for us, and we were off to Ngorongoro.

Again, we were so sad to leave as the entire staff came out to say goodbye to us.

We wished we could stay for one more day, in what was the best camping you could ever do. What an amazing experience. Again the staff made the stay perfect.

The logistics of setting up a mobile tent camp are mind-shattering. This camp sets the standard for excellent organization and conception 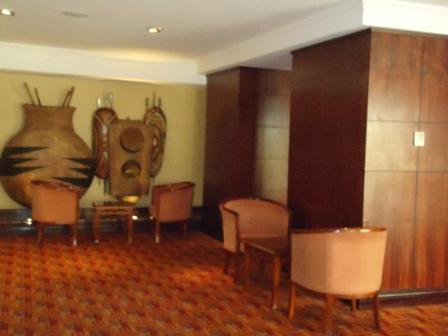