You are Here: Home › Facts about Kenya › Kenya Weather

Do you want to visit Kenya? Are you concerned about Kenya Weather and Climate changes?

On this site we are happy to show you all the details about Kenya climate and weather information.

Kenya is generally a dry country; over75% of its area is classed as arid of semi-arid with only around 20% being viable for agriculture.

Inland, rainfall and temperatures are closely related to altitude changes, with variations induced by local topography.

Generally the climate is warm and humid at the coast, cool and humid in the central highlands, and hot and dry in the north and east.

Across most of the country, rainfall is strongly seasonal, although its pattern, timing and extent vary greatly from place to place and from year to year.

Kenya's climate varies across the country, from the tropical humidity of the coast, the dry heat of the savannah or semi-arid areas and the cool air of the highlands.

The rain tends to fall mainly at night and is usually a short and heavy tropical downpour. Rain may occasionally fall outside of the normal rainy seasons. In the highland areas north of Nairobi it may get chilly at night or in the early mornings - especially June, July, August when temperatures are cooler.

Always a difficult one with global changes etc:

August : Expect a short shower early morning or afternoon but not always! they will dry up in minutes,hot good sunbathing weather!

Expect the wildebeast migration in Kenya around Aug/Sept; you will need to book camps and lodges early around these times as the best ones will have already been booked. Although Tsavo will be fine to book on arrival if you wish, but again some lodges may be full (but not likely).

The relatively wet coastal belt along the Indian Ocean receives 1,000 mm or more rain per year. Most rain falls from April to July as a result of the southeasterly monsoon.

Another moist belt occurs in the Lake Victoria basin and its surrounding scarps and uplands, mainly due to moist westerly winds originating over the Atlantic Ocean and Congo Basin. Except immediately adjacent to the Lake, rainfall occurs reliably from March to November.

The upland plateau adjacent to this area are less influenced by the lake, and rain falls mainly in March-May and July-September. In much of the central highlands, there is also a bimodal rainfall pattern, with rainy seasons in March-May and October-December.

The remaining 70% or so of the land area falls into the ‘arid lowlands’ zone with rainfall averaging less than 500 mm and varying greatly from year to year.

Rainfall peaks in most areas are in November and April. Some 30% of this zone can be classed as semi-desert, with rainfall averaging less than 300 mm per year and evaporation often greater that 3,000 mm.

Except for the coast and Lake Victoria region, altitude is the main determinant of precipitation. The high-attitude areas (over c. 1,500 m) in the central Kenya highlands usually have substantial rainfall, reaching over 2,000 mm per year in parts of the Mau Escarpment.

However, topography also has a major influence, with strong rain-shadow effects east of Mt. Kenya and the Aberdare mountains. Here, even areas higher than 1,800 m may be relatively dry.

In the arid lowlands the peaks of isolated mountains attract cloud and mist, and may support very different vegetation to that of the surrounding plains.

Differences in temperature vary predictably with altitude. Frost occurs regularly at 3,000 m and occasionally down to at least 2,400 m, and there is permanent snow and ice on top of Mt. Kenya at 5,200 m. The hottest areas are in the arid northeast, and west of Lake Turkana, where mena maximum temperatures average over 34 C. 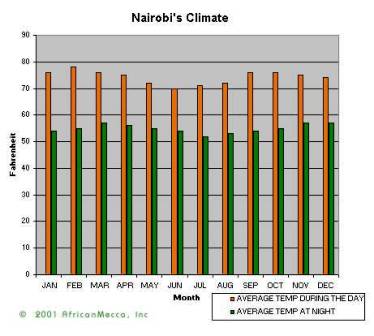