You are Here: Home › Kenya Culture and People › Kenya Music and Kenyan Artists.

Traditionally, Kenyan music originates from several sources. Many of the Nomadic tribes of this region share some common ground in the use of songs and chants, particularly among Maa speaking groups. Maa song has always played a large role in ceremonial life, and continues to.

One of the best known Maasai ceremonial songs is the Engilakinoto, sung after a victorious lion hunt. Structured around a deep rhythmic chant it is accompanied by a spectacular dance in which warriors display their strength and prowess by leaping directly and vertically into the air.

Elsewhere, the use of drums became widespread and central to elaborate traditional dances. The word Ngoma (drum) is still used to describe most forms of traditional music and dance.

A variety of drums were used throughout the country. The Luhya of Western Kenya developed a very distinctive dance style called Sikuti after the local name for a drum.

This extremely energetic dance is usually performed by paired male and female dancers, and accompanied by several drums, bells, long horns and whistles.

The Kamba and Chuka people both developed a distinctive drumming style, in which a long drum is leant forward and clasped between the thighs. The Kamba were well known for their athletic, almost acrobatic dancing.

Other instruments were developed, including reed flutes and basic stringed instruments. One of the finer of these was the Nyatiti, similar to the medieval lyre.

The Nyatiti is commonly played throughout Kenya’s West. It has a gentle, relaxing sound, and is usually played solo with a single singer, and sometimes accompanied by light percussion or bells.

Ayub Ogada is a modern master Nyatiti player from Kenya, who has become internationally famous. His first album En Maana Kuoyo is an excellent introduction to the sound of the Nyatiti.

On the coast, the growth of Swahili culture saw the growth of a unique style of music, called Taarab. Combining elements of African percussion with Arabic rhythms, Taarab become a popular form of music that remains a coastal favourite today.

Traditional Taarab music used large numbers of musicians and Arab instruments such as the Oud, combined with violins and several vocalists. Modern Taarab continues to evolve, and is adopting some rhythms and grooves from Hindi film music and bhangra.

But at the heart of Taarab remains a core of very rhythmic, poetic Swahili lyrics. One of the better known Kenyan exponents is Juma Balo.

Inland, the colonial period gave rise to Beni singing, a group folk song that contained strong elements of social commentary and political criticism. Beni songs were always very long and were sung in the form of a narrative story.

The 1960’s saw the arrival of both Independence and the electric guitar, and the birth of modern Kenyan popular music. There were two definite influences:

From the South, South African Jazz and Zimbabwean ‘highlife’ guitar work, and much more significantly, from the West, the distinctive rumba rhythm of Congolese pop.

A hybridized form of music evolved- widely known as Benga, and usually rather tribally targeted. Singers sung in their own tribal language, resulting in strong ethnic followings.

Many of these artists remain popular today, such as Luo musician DO Misiani , late great Luhya legend Daudi Kibaka and venerated Kikuyu singer Kamaru, and his subsequent imitators such as One Man Guitar.

The rise of Christianity greatly increased the popularity of gospel music in general and choral music in particular.

Throughout the 1970’s and 80’s Nairobi became a popular crossroads for African musicians, and many Zairean rumba bands either made Kenya their home or a frequent stopover concert venue.

Their influence on Kenyan music was considerable, and much of popular Kenyan music derives its central rhythms and guitar lines from Congolese pop. Even today Lingala and Congolese music is extremely popular throughout Kenya.

There was some influence from the coast, using more Swahili and Asian based styles, resulting in a short lived wave of Kenyan pop, spearheaded by Them Mushrooms from Mombasa.

The 90’s and the 21st Century have seen a great deal more Western influence, and the adoption of reggae, rap, rhythm and blues and swing into Kenyan music.

A new wave of popular musicians is creating a form of Kenyan music which fuses traditional elements with the many external influences to produce something new and very interesting.

They called themselves Gidi Gidi Maji Maji, and had a surprise runaway hit with ‘Ting Badi Malo’ an infectious pop song built around a blend of Swahili and Sheng rap.

After taking a break to attend Uiveristy, they returned with a vengeance to release 'Unbwogable' a danceable and politcally flamable song that became an anthem for opposition politics and reached its peak with the 2003 change of Government in Kenya.

One of Kenya’s most inspiring stories is that of Mighty King Kong, an Afro-reggae singer from Western Kenya. Born in Siaya District, he was afflicted with polio at a young age, badly withering one of his legs. When his father died, his family moved to Kisumu, where he ran away from home.

He lived for 6 years on the streets of Kisumu, during which time he made money by busking. His singing and dancing earned him local fame, and his new name ‘The Mighty King Kong’. Eventually he made his way to Mombasa, where he began to get work as a DJ in several nightclubs, before finally taking to the stage with his own act performing reggae in Luo, Swahili and English.

He was an immediate hit with crowds in the clubs, and was soon playing to packed houses across the country. His first album Ladies Choice sold well throughout Kenya.

From a very different background is Eric Wainaina, a young classically trained musician. His musical style is a blend of very African guitar riffs with a commercial Western feel.

His first album, Sawa Sawa was a hit, mainly through the success of the single Nchi ya Kitu Kidogo, a satirical political song with a highly danceable melody.

Rap has become increasingly popular among young Kenyans, and there are several Kenya based rap acts. While the sounds of groups like Kalamashaka or Necessary Noize are virtually indistinguishable from US based rappers, the lyrics are most definitely Kenyan and have much to say about life in modern Kenya. One of the more popular Kenyan rappers is Poxie Presha, whose well cut album Total Ballaa was a massive hit.

Ragga has also become popular, with blends of Afro-reggae and rap. One of the better known Kenyan Ragga artists is Nazizi the female vocalist from rap group Necessary Noize also known for her solo ragga work.

The formation of a loose alliance of Kenyan Hip Hop artists as Ogopa DJs created a nonstop hit factory that sent tune after tune to the top of the Kenyan charts.

By 2002, formerly idolized Western artists were wiped out of radio airplay by Kenyans such as Nameless- who had a huge hit with Ninanoki and went on to record the bestselling album On Fire.

His collaboration with a young artist E-Sir was a track called Boomba Train, that also dominated dancefloors and clubs across the country. E-Sirs career was tragically cut short by a road accident in 2003.

The Ogopa group produced many other young stars, including Mr Googz and Vinnie Banton a talented duo of singer-songwriters whose hip hop song about life in the outer Nairobi suburb of Githurai became anthemic throughout the city.

Redsan, a singer as well known for his looks as his music has kept Kenya's female population enthralled with hits such as Julie and Raha- a track whose hip hop overtones are underscored with coastal taarab sounds.

As the current trend for fusion of world and western styles grows, many Kenyan artists are exploring this new realm of musical possibility. One of the most popular up and coming artists is Mercy Myra who combines traditional and modern, African and Western styles.

The arrival of better and more easily accessible instrumentation and recording facilities is continuing to strengthen and diversify the Kenyan music scene. Quality CDs of Kenyan music are widely available in Nairobi, and can be found internationally in some specialist music stores.

As music in Kenya continues to grow and evolve, and opportunities for young talented Kenyans increase, the future sounds great… 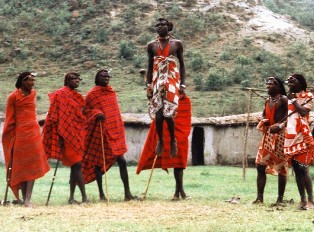