The tents were nice size and had full working bathrooms attached.

We had no problems with hot water.

We enjoyed sitting on the porch with our friends and listening to the sounds. Game walked nearby and you could definitely hear hyenas at night.

At night they had a large fire going so you could sit outside and enjoy the stars.

The first night the camp was full with a tour from Holland so the atmosphere was quite different from the second night when we had the place pretty much by ourselves.

The first night there was a dinner buffet that had plenty of food and nice options.

The second night the dinner was off a menu with several choices for the entree. Breakfasts were also good.

Service was good overall. We were unhappy that our guide was not allowed to eat with us.


It was a totally different atmosphere than staying in a lodge but it was definitely a step up
from basic tent camping. After spending nearly a week of sleeping on the ground while
climbing Mt Kilimanjaro, I wanted the luxury of a bed. However, I didn't want to give up too much of the sights and sounds of being in Africa

Mosquito nets were intact and bedding was clean and comfortable.

I figured out early in the trip to take my showers at night if I wanted hot water.

There were geckos in the tent but nothing else. Someone came around to each tent at sunset to sell drinks.

There was always a guide to take you to dinner but sometimes they were not available to take you back. At night, the animal sounds were amazing! I heard Hyenas cackling.

The menu did repeat everyother day (remember I was there for 5 days) I did eat lunch there once and it was not good.

They served spaghetti with baked beans on top...

FINAL THOUGHTS this place has had several upgrades since the end of 2010. They hired a new chef, they made improvements to the water situation, and the service has improved leaps and bounds.

They do have internet but it is SLOW, as a matter of fact, they never charged me to use it because it was so slow. I had a great time the 5 days I stayed here 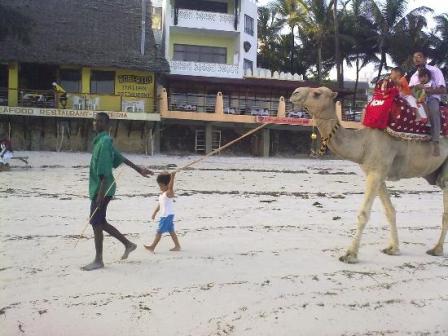