You are Here: Home › Facts about Kenya › Daily Nation Kenya

The Daily Nation Kenya , an independent newspaper, is the most influential newspaper in Kenya with a daily circulation of about 205,000 copies .

The total readership is likely to be higher as each copy is read by a large number of people. It is East Africa's largest newspaper.

It is headquartered at Nation Centre, a landmark 17-storeyed twin tower building situated in Kimathi Street in the central business district of Kenya's capital city Nairobi.

It is part of the Nation Media Group. It is a publicly listed company, quoted on the Nairobi Stock Exchange, and has about 7,500 shareholders.

The Daily Nation was started in 1958 as a Swahili weekly called Taifa by the Englishman Charles Hayes. It was bought in 1959 by His Highness Prince Karim Aga Khan IV, the spiritual leader of the Ismaili community worldwide. Taifa was then changed into a daily newspaper, Taifa leo (Swahili for "Nation today"), in January 1960.

An English language edition called Daily Nation was published on 3 October 1960, in a process organised by former editor of the British News Chronicle, Michael Curtis.

The publisher was East African Newspapers (Nation Series) Ltd, which later became the Nation Media Group with its operations over the years covering the entire East African region with a diversified product portfolio.

The Daily Nation and its sister paper Sunday Nation have grown phenomenally since inception. They command a market share of 74 per cent and outsell their nearest competitor by a ratio of more than 3:1.

Apart from Daily Nation, the Nation Media Group owns a television station (NTV), a radio station (Easy FM) and other newspapers including the weekly The East African, a daily business paper, The Business Daily, the Swahili language daily Taifa Leo and the Ugandan daily The Monitor.

Digital versions of the Nation titles and The East African are sold to subscribers via Newsstand.

The newspaper also maintains a website, which hosts online editions of the daily and Sunday titles with links to its other titles, across the region. Access is free and the site's daily hit rate is more than three million. 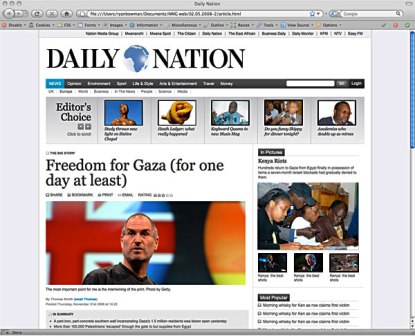