You are Here: Home › Facts about Kenya › Central Bank of Kenya

Since then the bank has been operating with the mission of maintaining price stability, fostering liquidity and creating a stable financial system in the country.

Major functions of the bank are as follows:

•Issuance of notes and currency

•Acts as a banker to banks and the government

The sole aim of the bank is to maintain money circulation and stability in price levels.

The shilling (sign: Ksh; code: KES) is the currency of Kenya. It is divisible into 100 cents.

The Kenyan shilling replaced the East African shilling in 1966 at par.

Between 1966 and 1978, the portrait of the first president of Kenya, Jomo Kenyatta, appeared on the obverse of all Kenya's coins. In 1980, this was replaced by a portrait of Daniel arap Moi until 2005, when a new coin series was introduced with the portrait of Kenyatta restored.

The coins are 50 cents and 1 shilling in stainless steel and bi-metallic coins of 5, 10 and 20 shillings. A bi-metallic 40 shilling coin with the portrait of President Kibaki was issued in 2003 to commemorate the fortieth anniversary of independence (1963-2003).

As with the coins, Mzee Jomo Kenyatta appeared on the banknotes issued until 1978, with Daniel arap Moi's portrait replacing him in 1980. In 2003, after Mwai Kibaki replaced Moi as president, 5, 10, and 20 shilling notes from the 1978 series with Kenyatta's picture that had been in storage were issued, and circulated for a time. 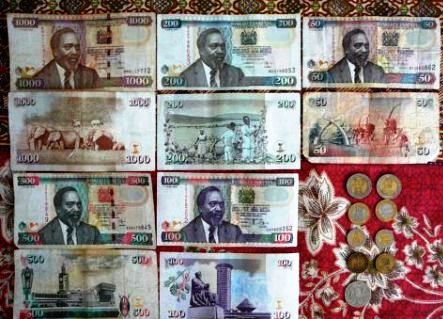