You are Here: Home › All Hotels › Moshi Hotels › Twiga Home

On a quite spontanious stop in Moshi, making our way to Arusha, we chose to stay at Twiga Home. We had about 2 nights in mind and ended up staying for 5.

Twiga home and Moshi is really an amazing place. Not only do you have Mount Kilimanjaro as your view everywhere you go, but the house has a brilliant charm to it.

Twiga Home is not your typical hostel or hotel - it's basically a house turned into an intimate and friendly chillout-spot.

The first thing you notice about Twiga is the extremely helpful and kind staff, who also speak very good English.

Due to the fact that the hostel is a bit out of town (still not far enough to be impossible to walk), Twiga has a free town shuttle which for us, due to the fact that we stayed there off-season, was available anytime we wanted it.

Some Other Hotels and Safari Lodges

When we arrived in Moshi, we were greeted at our random bus stop by the lovely Adelina, the manager, who chose to not only pick us up in a taxi, but also pay for it, due to the van being on an excursion at that particular time.

Mentioning that, Adelina can arrange several different trips to see in and around Moshi. We would reccomend the coffee tour.

At Twiga we had a double room, and we can't deny that it was very small, at least when you have two massive backpacks two small bags and a guitarcase with you!

We also chose the room without air-con, and it became quite stuffed when you had a shower, even though the fan was on full power.

You have an en-suite bathroom, which consists of a shower right next to the toilet. Straight after a wash, the bathroom is slightly unuseable due to a lot of saturation. However the water is hot and you certainly can't complain about cleanliness.

At night, the fan can be quite loud, but to be honest it didnt bother us, even with one of us being a light sleeper.

The outside area is very relaxing, being split into two parts.

One with a bar, which seems to attract locals in the area, especially during football matches, which actually gives a nice vibe to the place, everyone mixing with the tourists.

The other area is mainly for eating and a place for only the guests, if the locals and football isn't for you. You can still unwind with the news on a little tv they have set up or watch an array of dvds.

The hostel has free wireless Internet and you can also use the computer at the hostel if you don't have your own laptop.

Everything from the food to the security was excellent, so we have absolutely nothing negative to say about Twiga Home.

During our stay the only slight minus I can think of were the fans which were quite loud, so for a slight sleeper they might be a problem. But even that is going to be fixed with AC being installed.

All in all we want to recommend Twiga Home most heartily to all travelling to Moshi! 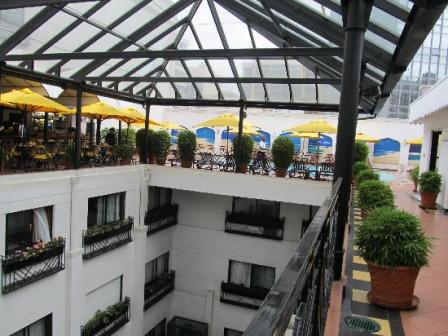