Tanzania Tourism Sector in the most developed venture in Tanzania . Tanzania is the only country in the world to allocate more than 25% of its total area to wildlife parks and game reserves. Major national parks and game reserves include: Serengeti,Arusha, Tarangire, Lake Manyara, Kilimanjaro,Ngorongoro, Selous Game Reserve, Mikumi, Udzungwa mountains, Ruaha and Katavi.

The country’s tourist market is divided into two major circuits: the “Northern Circuit” which comprises the world’s most dramatic National Parks of the Serengeti, Tarangire, Lake Manyara, and Arusha National Parks.

The spectacular Kilimanjaro National Park, along with the Ngorongoro Crater, which is considered as the eighth wonder of the world, are among the most eye catching and breathtaking geographical attractions in the world.

Other attractions include Lake Victoria (the source of the Nile) Lake Nyasa and Lake Tanganyika, which provide other opportunities for beach resorts, water sports and game fishing.

Although Tanzania attracts significantly lower numbers of tourists than Kenya, it has much larger tourism receipts. In part, this is because Tanzania is more expensive (e.g., higher hotel rates), but it is also because tourist activities differ in the two countries.

In Kenya, a substantial part of the tourists visit takes the form of a beach holiday, which is relatively cheap, while in Tanzania it is mostly safari tourism, which is more expensive. Tanzania’s Indian Ocean shore line has 804 km of some of the finest unpolluted beaches in Africa.

The white sands and un-spoilt beaches provide a serene atmosphere for relaxation and sunbathing. Situated offshore, are Zanzibar and Pemba – the exotic ‘Spice Islands’ famous for their history, deep-sea game fishing and beaches. These islands are easily reached by a 20-minute flight, by hydrofoil or by boat from Dar es Salaam.

Along the Indian Ocean islands are the remains of ancient settlements. At Olduvai Gorge, in the interior Rift Valley, is the site of the discoveries of the traces of early humanity.

Gombe Stream National Park is home to the world’s bestdocumented research on primates (chimpanzees and baboons), pioneered by Jane Goodall in the 1960s.

To the tourist, Tanzania also offers interesting culture and crafts, notably the Maasai culture and art and the Makonde sculptures and carvings done in ebony.

Tanzanians are a very friendly people with a long tradition of generous hospitality and a wealth of folklore.

The ancient trading port of the Sultans of Oman,Zanzibar is a unique tourist attraction in the south of the equator.

Carved doors and balconies decorate houses made of coral stones. The inland of the island offers the most luxuriant tropical vegetation, giant trees, ferns and various endemic species.

Changuu island offers the only sanctuary for its hundred-year old tortoises and the marine reserve in Chumbe for its protected coral reefs. The Zanzibar Channel is famous for scuba diving, providing opportunities for waterports 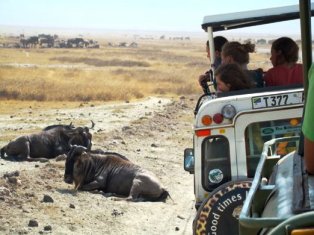