Tanzania Agriculture Sector is the most profitable venture one can invest in. Agriculture is the leading economic sector in Tanzania, providing a livelihood to 80% of the population subsisting on less than two hectares.

It is the primary source of food and raw materials accounting for not quite half of the GDP and a leading export sector.

Smallholder farmers responsible for 90% of all farm produce underutilize arable land, as production systems remain archaic in tillage,storage and processing.

The flow of FDI in agriculture stands at only 5% of the total when compared with other sectors.

Several reforms have been undertaken including liberalizing and granting the private sector permission to compete in the processing and marketing of cash crops; land laws have been revised to allow for long-term leases of up to 99 years for foreign companies.

Other programmes to promote the agriculture sector include the Agricultural Sector Development Programme (ASDP); the Integrated Road Projects (IRP) to open up transport networks including rural roads in key agricultural areas.

Water for irrigation can be accessed in the flood basins of rivers and in numerous lakes and, to some extent, underground water sources.

In view of existing water, land and socio-economic considerations, the irrigation potential in the country is estimated to be 29.4 million hectares with varying degree of irrigability.

Beef IndustryThe current national stock is 15mn, 98% of which is the indigenous Zebu and only 2% are commercial stocks. Ranching accounts for only 1% of total beef produced coupled with the absence of beef processing plant in the country.

The pig industry is very under-developed with a total pig population of less than 500,000 with most production in the hands of small producers keeping less than 20 pigs.

The existing goats and sheep for the time being are indidineous breeds characterized by small size production and low productivity.

The per capita consumption of poultry meat and eggs is 1 kg and 17 eggs respectively. This consumption level is very low by any standards and the quality leaves a lot for improvement.

The country has 3 small poultry processing plants each with a capacity to process less than 3,000 birds per day. Furthermore, the country has a hatching capacity of 30 million eggs per year at current un-utilization of 50%

While the country is a net importer of milk and related products, the dairy sector is fast growing.

Estimates show that by 2010 there will be a deficit of about 170 million litres if there is no intervention.

About 80% of domestic milk output is produced by the indigenous short horn Zebu. Its milk yield is very low – less than 400 litres per lactation of 180 days. 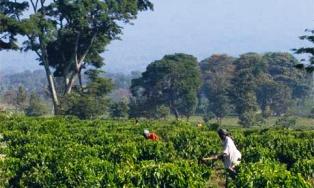