You are Here: Home › Kenya Animals and Wildlife › The Spotted Hyena

The Spotted Hyena, Crocuta crocuta, is one of 2 Hyenas found in Kenya (the other being the shy, purely nocturnal Striped Hyena Hyaena hyaena)

Despite the size and superficial resemblance to a dog, Hyenas are not related to any of the canine species their closest relative is the Aardwolf.

Hyenas have a formidable set of molars which can grind and crush just about anything, this allows them to make the most of any carrion they find (they will eat every part of an animal including bone, skin and hair).

They will also eat dead of their own species. They are social animals being found in pairs or small packs (these can become quite large at certain times of year).

Packs of Hyenas will work together to drive lions and other big cats off a kill. Hyenas will also hunt, taking young, old or sickly animals, they will also hunt down gazelle and will break into enclosures around human habitation to take livestock. The females are ferocious when it comes to defending their young. 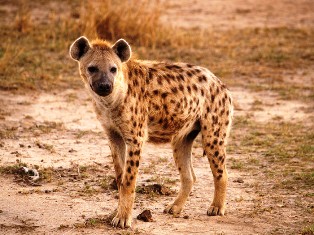