I would have found the Sentrim Nairobi Boulevard Hotel in Nairobi a great hotel anyway,

but after weeks of backpacking and camping throughout Kenya, it was sheer heaven!

So after arriving at the Boulevard Hotel in Nairobi, it was like luxury to me.

The hotel seemed even more clean and comfortable after weeks of roughing it in a canvas tent, but it was a good hotel anyway, with great rooms- I'd booked a room for one person, and couldn't believe the space I had, plus each room had a fan, a hairdryer, and a kettle for making tea!- and lovely gardens.

I couldn't believe the size of the gardens, but what ruined it for me was that there was a huge big billboard on the street outside, just on front of the hotel, that had that part of the garden in shadow, and ruined the view from that side.

Not the hotel's fault, obviously, but it's something to be aware of.

That said, I couldn't fault the gardens- especially loved the little bird house, and the flower archways, and it was nice having the swimming pool out the front, and the gardens around the other side.

All in all the impression was of lots of space everywhere. 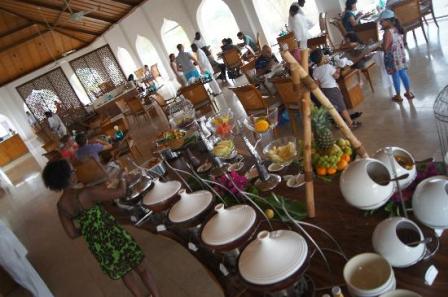