You are Here: Home › Hotels › Hotels in Arusha › Rich Lodge 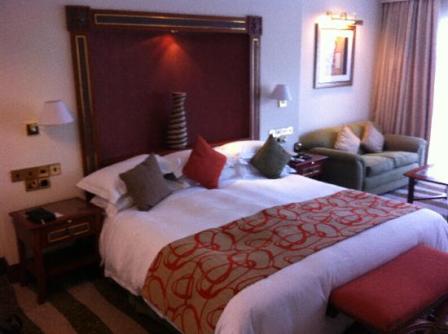 After travelling for many hours and getting dissapointed at the sight of the original hotel that my friends and I had booked, Rich Hotel came as a savior seeing that it was getting late and we were exhausted.

It seems to be a quiet hotel that's popular with local businessmen rather than tourists, with some great views of the mountains from the upper north facing floors.

We were pleasantly surprised by the staff who were so helpful to us from the minute we reached the reception. Carrying our bags, and making us feel at home. It was great.

We took 2 doubles and a tripple room, it was very very clean compared to the hotel we had initially booked.

The staff was very helpful and pleasant. The breakfast was simple but served with so much care and dedication, that it just moved us.

The hotel also has lifts which was so welcome. We got clean towels everyday and none of us lost anything at the hotel. Its pretty safe, and the rooms have a simple safe.

They had satellite TV which was a welcome relief to us all. The food was average, not to die for. The down side is that it didn’t have a pool. Otherwise i would definitely recommend this hotel to people while in Arusha.

The hotel charges an affordable $35US for a single and $40 a double (or shilling equivalent). It's very clean, with an attractive atrium in the middle, giving the hallways plenty of light. There's always an armed guard outside the front door who's very friendly.

Breakfast (included) is simple, toast, tea, coffee, a small plate of fresh fruit and eggs made your way on demand.

The biggest drawback at the hotel is the proximity to the mosque on Mosque street. You'll be woken by prayer call at 5am. The mosque is south of the hotel (right hand side as you face it) so try and get a room on the left (better views too).

Other Hotels and Safari Lodges in Arusha