The Raha Lodge villa is located directly on a white sandy beach and very close to the African village of Jambiani.

everything is perfectly clean and the cooking is FANTASTIC!!!

My wife and I spent three wonderful days at the lodge Raha 2 to 5 January 2012. This is a villa with 3 double rooms that can be rented individually.

And 'situated in a beautiful place called Kikadini in the south of the fabulous beach of Jambiani,

just in front of the lodge and the sea forms a natural pool with large emerald green water.

Jambiani has a special atmosphere: you'll share your day on the beach with people from the nearby village and you can attend to their daily activities such as fishing or collecting of algae, but also for training and football games that are fun evening, all this with confidence because the inhabitants of Jambiani are particularly friendly.

The rooms of the Raha Lodge are spacious and very comfortable, with large bathroom with double sinks, hot shower, even if the taps would urgently need to be replaced because the old and rusty.

The decor of the rooms and common areas which is very nice.

The walled garden that overlooks Spaiggia is equipped with beds, sofas and a beautiful rocking all covered with mattresses and cushions, on which we enjoyed a pleasant and relaxing moments in complete privacy because we were the only guests of the lodge.

We had at our disposal a very good cook, a night watchman and handyman girl named Belinda who does everything possible to keep the house tidy.

A separate discussion deserve the manager Kim who should be the contact person for guests of the lodge ..... the problem is that Kim is probably busy elsewhere because we have seen very little and even the day of our departure he came to say goodbye.

The kitchen of the Raha Lodge is not for the exclusive use of guests, but also function as a restaurant for lunch and dinner. 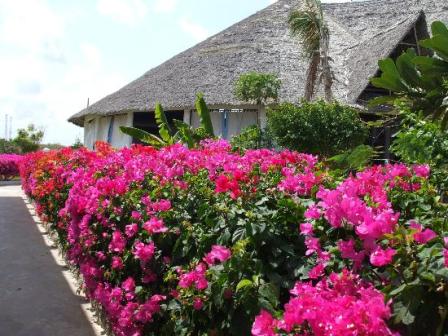