I love sleeping in a rainforest, and Primate Lodge in Kibale Forest National Park Uganda was one of the prettiest and most comfortable ways I've done this. We stayed in the luxury tent - really a massive tent with an en-suite bathroom, on a wooden platform and under a roof.

In front of the tent there are small chairs, where you can just sit and listen to the sounds of the forest.

The tents are distributed in the forest in a way that you don't see anything around but the trees and plants, so you really have a feeling of sleeping directly in the rainforest, especially at the dusk when all the insects and animals start to scream.

Generally one of the best night rests I've had in kibale forest national park Uganda (plus good mattresses, which are also not all that common around the country).


The setting is beautiful. You are about 2 minutes walk from the start of the chimp tracking.

The tents are located in the forest so we saw grey-cheeked mangabeys and black and white colobus monkeys from the dining area. There were also hundreds of beautiful betterflies flying around.

We did three lots of chimp tracking while we stayed here. Each time we did it was totally different.

The first time the chimps were running around on the ground quite a lot and so we had to run through the forest to keep up with them.

The second time they were all around a fruiting fig tree in the forest only just above groud level.

The third time they were right in the top of the tallest tree for miles around and they just stayed there snoozing.

All three walks were totally different. I would definitely recommend doing it at least twice.

Other Hotels in this Area

The walking itself is much less strenuous than the gorilla trekking. Kibale forest is flat which makes it much easier.

However, if the chimps are on the ground they will probably be moving quickly and you need to keep up otherwise you will lose them (it's amazing how quickly something so big can just disappear). This means running through the forest.

You will need lightweight long sleeved shirts and trousers so you don't get scratched by thorns or bitten by insects. You will also need a sturdy pair of shoes.

We also did two walks around the Bigodi swamp, which I would definitely recommend.

You should go either very early in the morning (as soon as the sun comes up) or at around 4 in the afternoon otherwise it is too hot.

The animals and birds are also more active during these times.

We also did three night walks in the forest to look for bushbabies. We saw at least one bushbaby on each walk.

A tip - there's a group of orphaned children in the village nearby who formed a traditional dance and music group, and can go and do a performance at the lodge (they don't perform as a part of the stay at the lodge, but I think you can ask the manager to arrange it). It's nice to see a bit of traditional dance, drums and music, and it's also a good way to help these kids a bit. 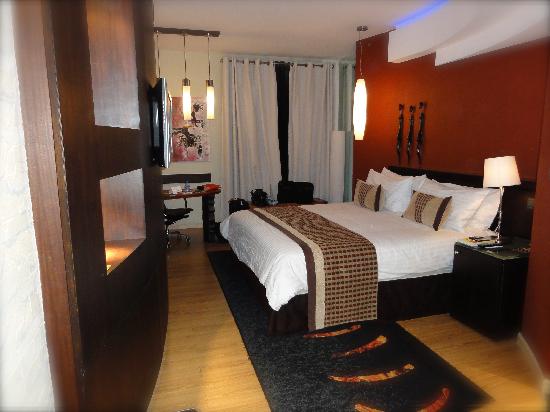