Peponi Hotel is a small, private, family-owned hotel; it was once a house, which grew into a hotel.

The atmosphere is intimate and low key. Peering through one teakwood door at Peponi Lamu Hotel, one faces the Swahili world.

Opening the other, one hears the tide bursting on the coral reef and feels the first flush of trade winds.

The Peponi commands the headland between the world of traditional peoples and a lonely sea.

To the southwest, lies an 8 mile stretch of soft sand that the locals call crowded if ten people, in all its length, are visible.

To the northwest towers the great sand dune where the bleached bones of the dead of a battle 175 years ago still surface when a brisk wind blows.

Other Beach Hotels and Vacation Rentals

The rooms are divided into superior and standard rooms. All rooms at Peponi have ocean views.

The superior rooms are differentiated by their location, size, private outside area, indoor plants, artwork and Swahili furnishings. No two rooms are alike.

Five of our rooms are built right on the beach, with private verandah areas overlooking the sea, while the rest have a combination of ocean and garden views.

Dinner is distinguished by a plethora of new ways of celebrating seafood with ginger, lime and garlic. Mangrove crabs, warm water lobster, squid, giant prawns and fish of all.

Peponi Lamu Hotel is set on the edge of Shela Village, 2km from Lamu Town and at the start of a stunning 13km deserted beach.After a 90 minute flight from Nairobi; you will be met at Manda Island and transported by boat for 15 mins to the hotel.

Peponi Hotel has a total of 25 rooms, which are divided into superior and standard rooms Five rooms are built right on the beach, with private verandah areas overlooking the sea, while the rest have a combination of ocean and garden views. 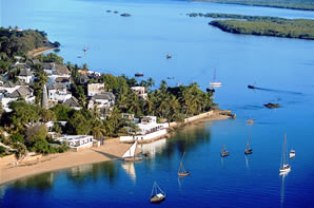