Our friend of 6 spent 4 wonderful nights at Ngare Serian Lodge in Masai Mara Kenya . It was absolutely spectacular.

We had three of the four tents, which are stunningly beautiful. The dining tent is also fabulous.

The hosting by Adrian and Rogine was lovely. Our guides, Sam and Bajila, were so great - I almost cried saying goodbye.

I found out at the next camp where we stayed that Bajila is apparently legendary. I can see why!

The Maasai men, Joel, Peter and the rest of the crew, took care of all of our needs while we were there. Nothing was ever too much too ask.

On our third day there, they provided fantastic entertainment with some traditional Maasai dancing and jumping.

We had our own private guide and driver who met us at the airstrip, who were very knowledgeable and friendly.

The camp is located outside of the reserve on a conservancy and we saw more wildlife here than inside the reserve.

The conservancy is connected to the reserve and the animals pass through freely, but it is governed by a different body.

Also, there aren't really any roads in the conservancy so you can get really close to the animals, which we did (unlike in the reserve where the rangers don't allow you to come off the road and unless the animals come close to the road, you don't see as much).

Our guide Jonathon was extremely knowledgeable and we saw some amazing sights because of his expertise, including the elusive jaguar, lions mating and young animals.

Our driver Kim somehow managed to get us through the craziest mud-soaked paths was an experience in itself.

The beds were very soft and comfortable, with luxurious down comforters. One negative is that because everything is white, there are some wine stains on the couch. But I still felt everything was very clean.

Plus, they spray inside the tent for bugs at night, which I love. They bring you coffee in the morning as a wake up call and we loved enjoying the coffee while we watched the view of the sunrise which was directly outside our room.

You are in the middle of the African wilderness and somehow we have a lovely hot shower and flushing toilets.

His and her sinks. A deep soaker tub. Again, it's not a dry walled room you are staying in, so all of this is happening outside. You are literally having a shower while watching the animals, yet surrounded by your tent for privacy.

I highly recommend this place. 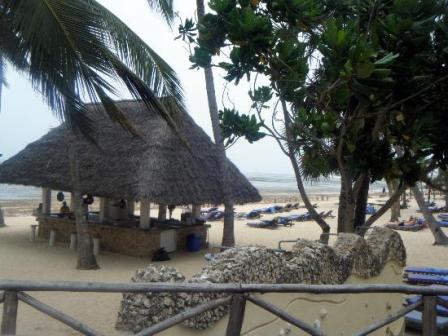