You are Here: Home › Kenya Animals and Wildlife › Monitor lizards

Monitor lizards are common near rivers and open water, and can often be found basking on sandbanks. They can grow extremely large, we have seen individuals which were more than 3 feet long (nose to tail).

They feed on carrion, birds, eggs and small mammals and will rob nests.

However we have watched as a Grey-headed Kingfisher (which isn't the world's largest bird) chased a large Monitor away from its nest.

It did this by dive-bombing its head and pecking it. They are quite popular in areas which rely on fishing as a source of income because they dig up and eat Crocodile eggs (and crocodiles are happy to eat fish, thus depleting the stocks when water levels are low). 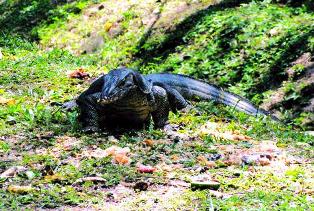