You are Here: Home › All Hotels › Lamu Hotels › Mkoko House

It's difficult to write about Mkoko House avoiding childish excitement.

The world is big, and there are so much to see, so much to visit... yet, after staying just 4 nights, an irresistible urge developed in us to visit the place again.

I could write about the Swahili culture, the bustling small Lamu Old Town nearby, the long stretches of flour like sand (which broke my old camera, btw), the dhows, etc

But Mkoko House is about not doing anything.

Just laying on one of the many mats in one corner of the house's intriguing Swahili architecture.

Listening to the breeze from the Ocean and to the silence.

Other Beach Hotels and Vacation Rentals

Watching the green carpet of mangrove forest in the background of Shela's sand dunes, or the white sails of the dhows heading to Takwa ruins, like dorsal fins of sharks in the green sea of mangrove.

Eating one of Iddi's, the caretaker's fabolous dishes..

It's admirable, so I have to highlight that even if the house has three double rooms, it's Nicholas' (the owners) policy not to book additional guests to the period of your stay. (eg. we were just for three alone in the house)

Even if I'm not a typical 5star hotel visitor, I was a bit afraid of an eco-lodge, as I'd never been to one before:

- Water: There's no freshwater on Manda. But they're collecting well enough rainwater in reservoirs to give you plenty to shower in.

Mkoko House is just a short walk from the beach, but this for me was a bonus. It meant that you were surrounded by very little apart from mangroves and the local wildlife. The family of 10 monkeys coming to say goodbye on the final day was a particular highlight. 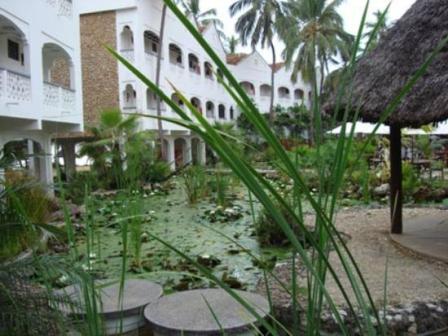