All you need to know about Lake turkana in Kenya is here. At Kenya’s far Northern frontier lies one of the natural wonders of the world.

Turkana Lake is a massive inland sea, the largest desert lake in the world. This single body of water is over 250 kilometres long- longer than the entire Kenyan coast.

It is widely known as the Jade Sea, because of the remarkable, almost incandescent, colour of its waters. After a long journey through the sweltering deserts and lava flows of Northern Kenya, the sight of this vast body of bright turquoise water comes as an unearthly

The Lake is a source of life for some of Kenya’s most remote tribes. The Turkana, with ancestral ties to Uganda, live a semi-nomadic existence around the Lake.

The country’s smallest tribe, the El Molo, live a hunter-gatherer existence on the shores, in villages of distinctive rounded reed huts.

Turkana has one of the longest living histories on earth, and recent fossil evidence unearthed at Koobi Fora has led to the Lake being referred to as ‘The Cradle of Mankind’. The site lies at the heart of the Sibiloi National Park, a place of stark beauty and prehistoric petrified forests.

The Lake itself is a natural treasure, with the world’s single largest crocodile population.

In Turkana these reptiles grow to record size, with some of the largest specimens found on remote windswept Central Island.

Lake Turkana is Kenya’s most remote destination, but one that repays the intrepid traveller with rich Getting Around -

The East and West Shores of Turkana are accessed completely separately, and are physically separated by the vast uncrossable Suguta Valley south of the Lake.

The east shore is reached via Maralal and Marsabit with the central point of access being the small oasis town of Loiyangalani.

The west shore is accessed via Kitale and the central point of access is Lodwar.

There are airstrips on both shores for chartered aircraft. This area is used as a launch site for safaris into the remote Omo region of Soutern Ethiopia. Turkana should be visited as part of a professionally organized safari.

There are very few defined roads around the Lake. The lakeshore can be explored on foot, but plenty of water and a good sense of direction are both vital.

Boats are available for hire in villages along the shore, and this is the best way to explore the lake. a local guide is advisable. 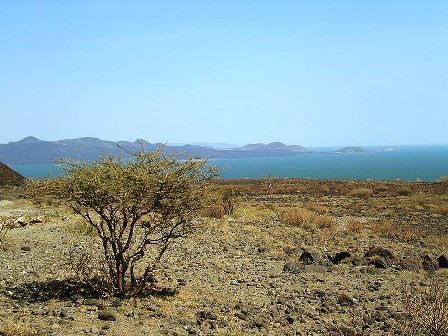