You are Here: Home › Kenya Animals and Wildlife › Kenya Warthog

The Kenya Warthog , Phacochoerus aethiopicus, is my personal favourite Kenyan mammal. I have no idea why this should be since I will admit that they are ugly, scruffy and not particularly appealing to most people .... but then I also love Giant Forest Hogs!

They mostly eat short grass and tubers or fallen fruit, however they are also known to eat carrion and small mammals. When grazing they look rather odd since they kneel.

Warthogs tend to avoid areas with dense cover, preferring open plains. When disturbed they run away with a rather oddly mechanical movement, their tails sticking straight up in the air.

Both males and females are fiercely defensive of their young and will attack using their lower tusks. They are also unusual in that they will adopt orphanwarthogs into their family groups (see .... doesn't that make you want to love 'em too!). 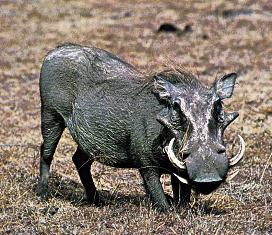